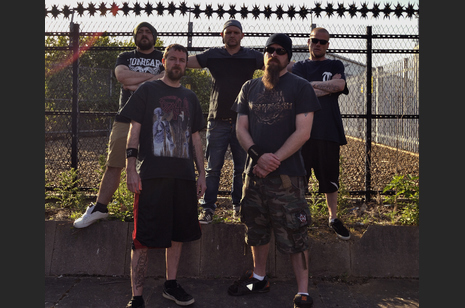 A UK Hardcore band formed in 1998 with the desire to make music for themselves and nobody else with true British attitude & spirit.

With various line-up changes throughout their 18 year reign, Vendetta now have the original four members which the band first started with, three of these members forging the foundations and backbone which has been the driving force behind the bands longevity. These three members are Adam Chalkley on Vocals, Wes Urban on Guitar and Gavin Spiers on Drums with the fourth member reuniting after 10 years in 2009, Leigh Jungic on Bass. Also with the recent addition of Warren Bekir (ex Tunguska Butterfly) means Vendetta are now stronger than ever.

With three tours under their belts, two in the UK and one three week tour of USA with bands (hed)P.E and Stuck Mojo, Vendetta are a force to be reckoned with within the UK Hardcore scene having also shared stages with Madball, Terror, Death Before Dishonor, Skindred and Panic Cell, to name a few.

Vendetta’s live show has to be seen to be believed with Adam's unmistakable rapid fire vocals and presence, uncompromising underground riffs and pounding drum beats results in a sound that can only be described as 'True British Aggression'.

Vendetta would like to thank M2TM for giving us this opportunity and understanding what we are, how hard we work and how strongly we believe in ourselves and the UK Hardcore scene.  For eighteen years we’ve struggled to get where we are today and to be playing Bloodstock is the greatest honour.