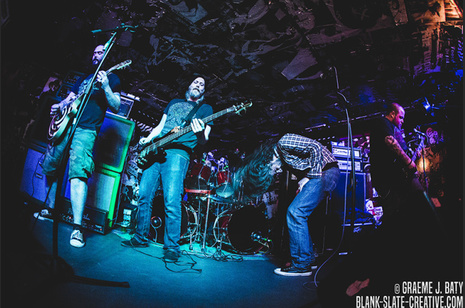 Raised from the ashes of various projects, Dirty King are an utterly filthy five-piece from Gateshead, with just a hint of Wallsend.
Hard-grafting family men, with years of experience in music, we love nothing more than to riff it out, and have a damn good time doing it. Although, when we're not playing, we equally enjoy getting out and supporting our local scene, as much as we can.

A plethora of influences, from across the spectrum of rock and metal, are shaped into thick, dirty riffs of doom, laden with groove, and crowned with carefully crafted, soaring guitar solos, in addition to guttural, melodic vocals, "guaranteed to grind just the right nerve" (Paul Sinclair, 2014).

Having supported trailblazers of homegrown doom, Conan, as well as local legends, Druganaut, regularly featuring on bills with the mighty Tombstone Crow (as seen at Bloodstock 2015), and now, impressing at Bloodstock's Metal2TheMasses Newcastle Final, compelling festival organizer, Simon Hall, to offer an additional slot, on The Jagermeister Stage, at Bloodstock Festival 2016, we are gaining momentum.
We aim to make you feel so manky, you'll want to shower for a week!

"Recently [Dirty King] have played two shows that really made me stand back and think “holy shit!”. They’re on the rise, with each show they get better and better. Powerful vocals and a killer groove. They can also handle their beer, so are pure gold in our books!" (Blank-Slate-Creative, May 2016)
We can't quite believe we're actually saying this, but...WE WILL BE PLAYING THE JAGERMEISTER STAGE, AT BLOODSTOCK FESTIVAL 2016!!! Thank you so much to everybody who has supported us. We really can't thank you all enough. The Metal2TheMasses competition was an amazing experience. Culminating in a Final which has to be the best gig we have ever been fortunate enough to be a part of, thus far. We're genuinely gutted for the bands that didn't make it. We're still not sure we deserve it, but, one thing is for sure....there will be many more gigs with all those who played. Make no mistake...there is some absolutely amazing talent in The North East, right now. We would have been proud to have any of the finalists representing our region on The New Blood Stage. Simon couldn't pick just one local band, he wants two at his festival, and we think that speaks volumes. Without the likes of Souls of Jack Ketch, I'll Play the Villain, Hellion Rising, Arcite....and many more....there would be no bands to cover, in future! Hopefully, we can finally be proud, to add Dirty King to that list of talent!!! Thank you....Thank you....Thank you so much for this amazing opportunity. We are genuinely flattered and amazed. We hope we don't let you down \m/\m/\m/\m/