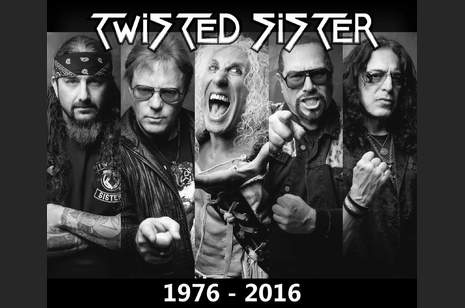 A product of New York City's early-'70s glam rock scene, Twisted Sister were eager students of the New York Dolls, with the theatrics of Kiss and the shock rock of Alice Cooper thrown in for good measure. While providing an excellent role model from an artistic standpoint, the Dolls' disappointing record sales and subsequent implosion would make it difficult for such faithful disciples as Twisted Sister to land a record deal, and the band wound up struggling for nearly a decade before finally getting their big break in the early '80s. Unfortunately, when this break finally came, the band would then embody one of the most gruesome examples of record company overexposure in the history of rock & roll (or at least since Kiss' late-'70s decline), bringing an abrupt end to their brief moment of glory.

Founded in December 1972 by guitarist Jay Jay French (who as John Segal, legend has it, played in a pre-Kiss band called Rainbow with Gene Simmons and Paul Stanley), Twisted Sister based their every move on the aforementioned New York Dolls. Their apprenticeship on the local club scene was a slow one, but by late 1975 a somewhat stable lineup had coalesced around French, fellow guitarist and high school buddy Eddie "Fingers" Ojeda, bassist Kenneth Harrison Neil, and drummer Kevin John Grace. A number of different vocalists filed through their ranks, but it was only with the arrival of Dee Snider in early 1976 that the band found its true leader. Snider brought a strong Alice Cooper influence to the band, giving their by then antiquated, fey glam sound a welcome kick in the ass. He also quickly developed into the band's dominant songwriter, and with new drummer Tony Petri in tow, Twisted Sister really started making a name for themselves in and around the city.

A significant growth spurt ensued; Snider wrote a wealth of original material and the band's live performances grew in local legend, setting attendance records that still stand in many clubs and culminating in a fruitful May 1978 recording session that would yield most of the material released 20 years later as the Club Daze album. Twisted Sister's transformation from glam rock also-rans into metallic hard rock contenders was completed later that year with the arrival of ex-Dictators bass player Mark "The Animal" Mendoza. November 1979 saw another studio session (this time at Electric Lady Studios with famed Hendrix engineer Eddie Kramer), which resulted in their first single, "I'll Never Grow Up Now!," released on the band's own TSR label in early 1980. Another single, "Bad Boys of Rock'n'Roll," followed that summer, but for all their hard work, come 1981 the band had only a growing collection of record company rejection slips to show for their efforts. Finally, independent Secret Records decided to take a chance on the group and after cutting the four-track Ruff Cuts EP, the group flew to England with new drummer A.J. Pero (ex-Cities) to record their first full-length album, Under the Blade, under the direction of UFO bassist Pete Way as producer. And despite obtaining only a mediocre sound from the inexperienced Way, the album became a surprise underground success, generating enough buzz to attract Atlantic Records, which came calling with a major distribution contract -- the final ingredient for Twisted Sister's assault on the charts over the next two years.
1983's seminal You Can't Stop Rock 'n' Roll laid the groundwork for things to come with its more polished production values and more consistent material, yielding only one chart-flirting single in the title track (for which the band filmed their first, incredibly cheesy, but rather amusing video) but garnering serious cred with the metal crowd. Later that year, L.A.'s Quiet Riot topped the charts with their smash hit Metal Health (the first heavy metal album to do so), and Twisted Sister took advantage of this sympathetic musical climate to unleash their own definitive statement, Stay Hungry. Digging deep into his pop and glam roots, Snider infused added commercial appeal to the band's hard rock onslaught, and with such monster hits as "We're Not Gonna Take It" and "I Wanna Rock" leading the way to radio and MTV saturation with their hilariously tongue-in-cheek videos, the album soon exceeded multi-platinum sales. The extensive touring that followed guaranteed the album's stay near the top of the charts for many months to come and, against all odds, helped make the "sick mo-fos" from Long Island into household names in America.
Of course the backlash, when it came, was equally sudden and incredibly vicious. Overexposed to the breaking point after converting every angry teenager in America and most of their parents, Twisted Sister had lost the edge of their dangerous image, not to mention the respect of their loyal but terribly possessive core metal fan base. To complicate matters, 1985's Come Out and Play album was very uneven; attempting to cater to both the band's hardcore elements and their newfound pop constituency and introducing an excessively glammed-up image makeover to boot, it quickly slid off the charts. Not even Atlantic Records' timely reissue of Under the Blade (with an added bonus track, "I'll Never Grow Up Now!") could staunch the bleeding, and a dumbfounded Twisted Sister found themselves quickly transformed from media darlings to favorite whipping boys.

For his part, Snider remained in the camera eye, however, appearing before a Senate committee later that year (along with such rock & roll luminaries as Frank Zappa and Bob Denver) to testify against the Parents Music Resource Center's demands for music censorship legislation. Sadly, it would prove to be Twisted Sister's highest profile appearance all year, as their concerts were frequently marred either by low attendance or crowd animosity. Adding insult to injury, drummer Pero had rendered his resignation at tour's end, opening the door to a very troubled 1986 for Twisted Sister, as rumors ran rampant about an irreparable rift between Snider and French over the band's direction. They eventually re-emerged with 1987's Love Is for Suckers, featuring new drummer Joey "Seven" Franco, but not even the services of flavor-of-the-month pop-metal producer Beau Hill could save the album from disappointing sales, and despite still getting by on the basis of their reliably fierce concert performances, Twisted Sister wound up disintegrating shortly thereafter.

Except for Dee Snider, who gamely soldiered on with an ultimately unsuccessful new hard rock band named Desperado (later renamed Widowmaker and featuring guitarist Bernie Tormé and drummer Franco), the members of Twisted Sister pretty much vanished from sight over the next few years. Grunge came and went, and posthumous releases like 1992's Big Hits and Nasty Cuts and 1994's Live at Hammersmith provided the only memory of Twisted Sister's meteoric flight across the hard rock firmament. As the '90s wore on, Snider's voice was heard promoting the New York State Lotto as often as shouting "I wanna rock!" and by decade's end he'd transitioned into a widely syndicated radio DJ and even sometime movie producer. He wrote and starred in the 1998 horror flick Strangeland, for which he also managed to reunite Twisted Sister's final lineup to record a brand new song entitled "Heroes Are Hard to Find."
His reconciliation with TS founder Jay Jay French (who'd kept busy managing bands, most notably nu-metallers Sevendust) eventually paved the way to a never-dreamed-of, full-fledged reunion of the "classic" Stay Hungry lineup, which performed publicly for the first time in almost 15 years at a post-9/11 benefit concert for New York City. By then, Spitfire Records had reissued much of Twisted Sister's original catalog, along with a pair of Club Daze collections documenting the band's "lost" '70s recordings, and, in 2004, released a re-recorded Stay Hungry (retitled Still Hungry) to mark its 20th anniversary. All of this activity fostered further demand for a more permanent return to action -- they even released a holiday album (Twisted Christmas) in 2006 -- and Twisted Sister have since toured sporadically across the globe, even, as documented by 2005's Live at Wacken DVD, performing to massive European festival audiences. In March 2015, the band announced that drummer A.J. Pero had passed away; he was 55 years old. ~ Eduardo Rivadavia, Rovi