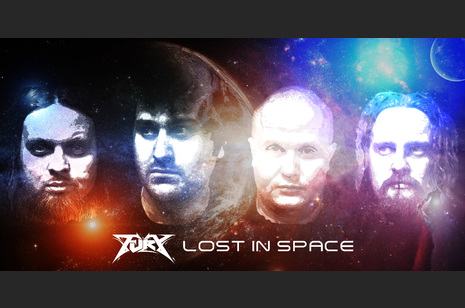 FURY ARE PROUD TO SHARE WITH THE UNIVERSE THEIR SECOND ALBUM

This record takes the template Fury have set out over the last 6 years; the big, expansive and fantastically crafted journeys within songs that the band love to create, but this time round, the universes the band are presenting simply have more detail to them. Fury have distilled and honed their story telling and are really excited for people to join them on these journeys. It is a hell of a ride!

Do not let the title and artwork (by the excellent Andy Pilkington of Very Metal Art) deceive you. Once the record blasts off, being Lost In Space will take you to a wealth of fantastical alternate galaxies. Extending beyond the beauty of infinity, witness the triumphant fall of a deity, before embarking on a breathtaking dragon back ride across reality. The next world may seem more familiar, as the band pay an emotional and sombre tribute, before picking up the ongoing saga of Fury’s favourite wizard... Close your eyes and imagine a massive stadium, packed full of people rocking harder than they have ever rocked before. From that roaring temple to the haunting and endless plains of the afterlife, before ascension and the beautiful melodies of deepest space. Finally, but no less exhilarating, a quest; a tale of piracy and salvation, to round off what the band hope you will agree is a pretty wild trip...

It is obvious that this is an unapologetically ‘big’ record. Several tracks run over ten minutes in length but it was felt that this was absolutely required to take the listener just that little bit further out than many other albums out there today. What sets this record apart is that the music is not intended to confuse or to simply be a show of technical chops, it is a musical journey built on the back of great melodies and great music.

The building blocks of this album’s themes will be familiar to fans of the band but the instrumentation and depth of the arrangements breathe new life in these concepts. In many aspects the record is a step beyond Fury’s previous album. Each member has grown musically since the last record and it has really allowed for greater articulation of ideas. The guitars in particular are much better developed and colourful than in the past and the rhythm section is tighter and more intuitive than ever before.

So what exactly does it sound like? Expect the signature Fury sound, but with a keener focus. A hybrid of classic British metal, stadium rock dynamics, cut with a tasty thrash edge. The production was handled by Pete Newdeck, who has imparted a fresh clarity and definition to the mix. This is the best sounding Fury record to date. What sets this potent sonic brew apart from the rest is Julian’s vocal. There has always been a raw power and distinct tone, but this time he has really stepped up. He has a truly unique voice and more than anything else, this is what defines and sets Fury apart.

For Fury, this album is a roller coaster ride that captures everything this band is right now. Sheer escapism and a whole lot of fun.

...We have had great fun mapping out this journey for you, we hope you enjoy the trip! - Fury

In 2013 we played on the New Blood Stage at Bloodstock and it was most definitely one of the highlights of our musical careers to date, so being invited back to play on the Sophie Lancaster stage alongside some great up and coming talent is an honour. In addition it is great to support the Sophie Lancaster Foundation by playing on the stage dedicated to her memory. We look forward to seeing everyone in August.