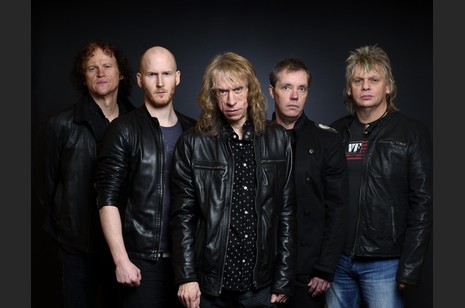 Brian and Duncan first started writing music together in early 1976 with Brian on cheap fuzz guitar and Duncan on Biscuit tins. Brian had a poster of an album by Phil Manzanera called Diamond Head that was released in 1975 and he thought “that would be a good name for the band”, but they needed a singer and auditioned several school chums until someone mentioned they had heard Sean Harris singing Be Bop a Lu La on a coach and so Brian asked Sean to try out and after one song he was asked to join. Colin Kimberley, an friend of Brian’s from junior school completed the line up.
The first demo tape was cut in 1978 in a studio in Kidderminster. This was used to get gigs, and a copy was sent to Geoff Barton at Sounds, who was suitably impressed and put them on his play list, and arranged an interview. Continual gigging set them in good stead. This saw them opening for the likes of ACDC and Iron Maiden. At the beginning of 1980, the band formed ‘Diamond Head Music’ as a means to putting out their own self financed material. Their first single was ‘Shoot Out The Lights’ backed with ‘Helpless’ on Happy Face Music.
They then recorded what was to become their first album release. Like Led Zeppelin’s fourth album it had no official title and has been referred to as the ‘White Album’, or ‘Lightning To The Nations’. There were initially copies 1000 pressed, which were in a plain white cover. Every copy was signed by one member of the band. This was available only at gigs or by mail order for £3.50 A further pressing of 1000 were done, which had the track listing on it. This contained 7 classic tracks including ‘Am I Evil?’, ‘The Prince’ and ‘Sucking My Love’.
The next single was ‘Sweet and Innocent’ from the White Album, backed with a new track, ‘Streets of Gold’. Two new tracks arrived in 1981 on DHM Records – the double A-side of ‘Waited Too Long’ and ‘Plat It Loud’. The Diamond Lights 12″ EP followed soon after giving us ‘It’s Electric’ and three new tracks, ‘We Won’t Be Back’, ‘Diamond Lights’ and ‘I Don’t Got’.
Later in 1981, the band signed to MCA Records, their first release being the ‘Four Cuts’ EP containing ‘Call Me’, ‘Trick or Treat’, ‘Dead Reckoning’ and a new version of ‘Shoot Out The Lights’. A second single; ‘In The Heat Of The Night’ was released prior to the ‘Borrowed Time’ album. A double single of this contained live versions of ‘Play It Loud’ and ‘Sweet and Innocent’ recorded at the Zig-Zag Club, together with a 14 minute interview with Tommy Vance recorded in June ’82.
Diamond Head played a magnificent set at the Reading Festival playing new tracks and old. The live version of ‘Sucking My Love’ would later be released as a 12″ with ‘Out Of Phase’, and the whole set 10 years later as part of the BBC sessions series.
Living On….Borrowed Time’ was released in late September 1982, in a lavish gatefold sleeve with stunning artwork courtesy of Rodney Matthews and entered the UK charts at number 24.
A 12 date UK tour followed in October and November to promote their new album taking in Birmingham Odeon, Mancheter Apollo and London’s Hammersmith Odeon.
1983 saw the release of the ‘Makin’ Music’ single as a precursor to the album that was also intended to be called ‘Makin’ Music’ but was changed to ‘Canterbury’. During the recording both Dunc and Colin left the band. Colin still plays on some tracks on Canterbury, but was replaced by Merv Goldsworthy, who would later to go on to form FM. Robbie France took up the drum stool. 20,000 copies of the album had pressing faults causing the first track to jump. This consequently affected sales, with it eventually charting at number 32.
‘Out Of Phase’, a second single was released backed with the album track ‘The Kingmaker’. The band played the Donington Rock Festival in the summer of 1983 and shortly afterwards, keyboard player Josh Phillips-Gorse was added. The band completed a European tour with Black Sabbath in September. Another tour of Odeon sized halls took place in October of that year to promote ‘Canterbury’. The band were preparing for a fourth LP, ‘Flight East’ in 1984 but were dropped by MCA. When their manager failed to get them a deal at the MIDEM music business convention, the band split.
The original line up got back together to jam through ‘Helpless’ and ‘Am I Evil?’ with Metallica at one of their shows at Birmingham’s NEC.
The following year saw Brian and Sean team up once again as a band with Karl Wilcox and drums and Eddie Chaos on Bass. Playing only new material, the band completed a small tour of UK clubs under the pseudonym ‘Dead Reckoning’. It was obvious that Diamond Head were now back in business. The band entered the studio to record tracks for an EP entitled ‘Rising Up’. Instead just a 2 track 12″ was released available only at gigs and specialist record shops. ‘Wild On The Streets’ had its origins back in 1978, but had never been completed or recorded. ‘Can’t Help Myself’ completed the single. Following two further club tours, Chaos was replaced by Pete Vukovic to record the ‘Death and Progress’ album. The album features celebrity guests in the guise of Megadeth’s Dave Mustaine who played on, and mixed the track ”Truckin’. Black Sabbath’s Tony Iommi also guests on ‘Starcrossed’, adding a very distinctive solo. Prior to its release, the band opened a show at Milton Keynes Bowl featuring Megadeth and Metallica on 5th June 1993. The album sold more than 50,000 copies to their ever loyal fan base. This show was later released as ‘Evil Live’ in 1994 along with extra tracks from the ‘Death and Progress’ sessions. This was to be Diamond Head’s last show for 7 years.

In late 2000, Brian and Sean started working on an acoustic project, reworking some of their back catalogue in an acoustic style with new recruit Floyd Brennan. The trio performed some low key gigs before recording a four track EP and perfoming at the Rock Shield Festival in Burton On Trent.

The acoustic shows had revitalised interest in Diamond Head, and new songs had already started to be written. Early in 2002, an offer to headline the New Jersey Metal Meltdown IV Festival as an electric band was too good a chance to miss. This signified the return of Eddie Moohan and Karl Wilcox. A couple of weeks rehearsal and a short 4 date UK tour warmed the band up for their first trip to American soil. Their headline performance proved a massive success with many US fans getting their first chance to see the band live. More new material was written and fans got to hear new tracks such as ‘Shine On; and ‘Forever 16’ on another UK club tour in September 2002, and a notable slot at the Derby Bloodstock Festival.

At the end of 2002 and the early part of 2003, Diamond Head ventured into the studio to record a new album with Andrew Scarth. Although this album had been completed, Sean’s reluctance to release it as Diamond Head or desire to play live, meant that it never saw the light of day. Determined to continue, the band played a short set at the Wacken festival in 2003 with ex- Tygers of Pan Tang’s Jess Cox on vocals.
2004 heralded a landmark in Diamond Head history as they embarked on a new phase with new singer Nick Tart. The year saw them rehearse and write new material as a revitalised band, and record a new album with Nick, ‘All Will Be Revealed’. The end of the year saw them perform their first gig infront of an invitation only crowd at JBs in Dudley.
Harking back to the early days and the ‘do it yourself’ attitude, 1000 self financed copies of their new album were pressed. These quickly sold out at gigs and via their website. In February 2005, Diamond Head embarked on a massive European tour supporting Megadeth which turned out to be a massive success for the band, impressing long standing fans and picking up younger ones along the way.
2005 proved to be a succesful year for the band. Cargo Records picked up All Will Be Revealed and gave the album a full commercial release allowing a much greater audience than the lucky few who had managed to get a hold of the pre release copies. The year culminated with another short tour and Diamond Head headlining a 25th Anniversary of the NWOBHM at London Astoria in November. The Astoria show was professionally recorded which resulted in a live album, ‘It’s Electric’ and Diamond Head’s first ever official DVD. The DVD was released in August 2006 and features bonus material of interviews and in the studio recording All Will Be Revealed.
Diamond Head released their new album ‘What’s In Your Head?’ on Livewire/Cargo on 30th July 2007 and the band toured the UK and Europe including KIT Festival, Germany, Diamond Head’s first headlining tour of Ireland and Hard Rock Hell. In December 2007, Diamond Head toured the UK as special guests to Thin Lizzy on their 30th anniversary tour of Live & Dangerous.
In August 2009, Universal records released a triple Diamond Head CD. Titled ‘The MCA years’, it contains re-mastered versions of Borrowed Time, Canterbury and Live at the Reading Festival. The release also includes some bonus material and demos, some of which have previously been unavailable. This is the first release of Borrowed Time and Canterbury on CD in the UK. The Reading set was previously released on Raw Fruit in 1992, but has long since been deleted and is a much sought after item by Diamond Head fans.
In 2010 Diamond Head tour the UK as the special guests to Europe on all dates in February. Also at this time, Brian Tatler’s much anticipated autobiography; ‘Am I Evil?’ was published as an exclusive hardback first edition print, available only at shows and through their website, the book received rave reviews and sold out quickly. It contains many unseen photos and has forewords by both Lars Ulrich and Dave Mustaine.
2011 saw more touring opportunities, and the band joined the Big Four playing at both the UK and French Sonisphere festivals. For the first time in their career, Diamond Head undertook a 17 date headlining tour of USA and also played some festivals in Canada.