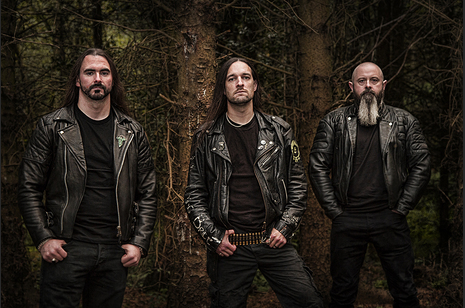 The Crawling formed late 2014, and churn out a heavy, slow, doom/death ensemble; forged against a backdrop of misery and contempt for the world that surrounds us.

Their latest release, ‘IN LIGHT OF DARK DAYS,’ is a 3 track EP displaying a dark and sinister side of the band. The three tracks are saturated with heavy guitar, a guttural vocal and dirty bass, successfully reflecting the song content of despair, misery and loss. There is no room for happiness in this recording.

The Crawling are steadily carving a place in the metal scene through intense live performances supporting the likes of: Foetal Juice, Skinned, Squash Bowels, Abaddon Incarnate, and Desecration, along with performances at Inferno Metal Festival Norway and upcoming Sunflower Festival NI. A growing social media presence on the strength of their debut single ‘Choking On Concrete’ proves The Crawling have started as they mean to go on - with purpose.

Being part of an underground band is a difficult, and often thankless, labour of love. That said, every now and again, something fantastic happens. At first it’s when you get asked to play a gig, then someone buys a cd, and then someone buys a t-shirt.  It’s an amazing feeling when another human being appreciates your music, and understands what you are tying to convey. Then there is performing at Bloodstock Open Air.

Playing Bloodstock is the pinnacle of what The Crawling have ever hoped to achieve. We are thrilled to be given such an opportunity, and eternally grateful to those that put us here. We are a band that was born through misery and despondence; but today even we find it hard not to smile.