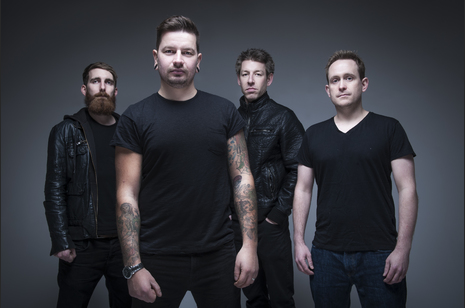 Bearfist - a four-piece metal band hailing from Chelmsford - an idea that started as a chat over a few beers between mates - and ended up being the groove laden wall of noise you hear today.

Formed in late 2014, we originally just jumped in a rehearsal room with a bucket load of riff ideas to see what sort of animal we had on our hands. Ideas quickly became more focused and songs were structured - the final piece of the puzzle was realised when Rob came in as vocalist and we hit the studio to record a demo and made our live debut in early 2015.

Now just over a year after our first live show - we feel we've grown and matured as performers and writers - focusing our efforts on bringing the relentless intensity of our songs into our live shows. Our debut EP 'The Fifteenth Day' is out now available on all major digital retailers.

We're blown away by the opportunity we've been given with the chance to play at the UKs best metal festival Bloodstock. The fact that the festival has a stage for the underground and unsigned bands speaks volumes to the dedication that they have for supporting the grassroots of metal. We're truly humbled to be the winners of the London M2TM and will be giving it everything we have to represent ourselves and the rest of the London region.