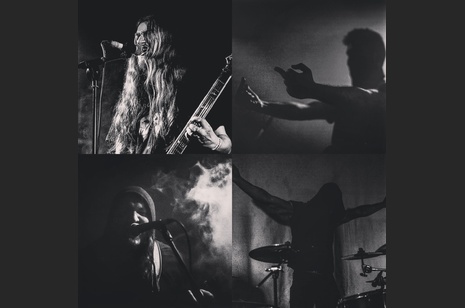 Vehement have been playing together as a band since 2005 but it was in 2012 with the recording of ‘Collapse’ that Vehement became what it is today.

Xysor (guitar/vocals) and Andras (drums) have been in the band throughout and the line-up is completed by Wraith (guitar/vocals) and Ohtar (bass/vocals). Our music is a culmination of our many individual influences spanning across music genres, but we create music for us, that we would want to hear, and that enables us a release through catharsis.

Though moving away from the stereotypical image of Satan and corpse paint, our sound remains firmly rooted in Black Metal, while lyrically we deal with themes surrounding consciousness, human contradiction and duality, depression, addiction and moral decline, all relatable to the present as opposed to the historical or theological. As of 2016 we are finishing work on our next release, due for later in the year, and subsequently we will be getting out to share our music amongst the populous.

We are extremely grateful to all those that came out to support us and helped us get through and we look forward to sharing our music with the people of Bloodstock, and getting to play at such a festival alongside so many great bands. See you at the front!  -Xysor