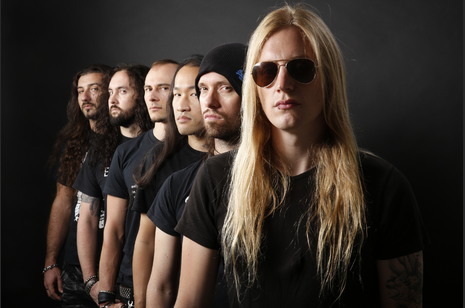 It’s astonishing to realise that DragonForce now have a history going back 15 years, and that they’re about to release their sixth album. But such is the pace at which music and life move these days that what was seemingly a highly promising young British metal band just yesterday are now an established full force (ahem) on the scene. In fact, their reputation is such that anything new from this lot is regarded as a landmark moment in the ongoing story of metal. But the new DragonForce album is a revelation, one that will surely entice them to another level of achievement.

It’s called “Maximum Overload,” and that’s precisely what you get from the 10 tracks on the main album, plus the five bonus songs for the special edition and a DVD. “We have our own style and sound,” says Herman Li, who founded the band in 1999 with fellow guitarist Sam Totman. “And we didn’t want to move away from that. Once you’ve got your trademark approach in place, that’s what fans come to expect from you. But we also wanted to challenge ourselves. We didn’t want to rehash what we’d done before, but take it all in a fresh direction.”

So, for the first time in their history, DragonForce have worked with an outside producer. The man in question is the celebrated Jens Bogren, who has previously worked with Opeth, Katatonia, Devin Townsend and Paradise Lost, among many others.

“We had thought about getting Jens to mix our 2008 album (“Ultra Beatdown”), so he was always in our minds. Sam and I have co-produced all our albums so far but the problem with that is it can be really hard to push yourself and the rest of the band. There’s always the temptation of going to the pub instead! This time around, we wanted a producer who’d really challenge us, and Jens was the perfect choice.”