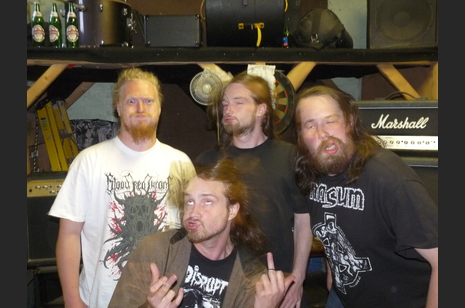 Foetal Juice are a Death Metal/Grind band from Ramsbottom near Manchester. We formed in 2005 as 4 mates having a laugh and soon found out that we can play some catchy death metal.

Since then we have tours the UK and Ireland extensively playing many of the smaller festivals such as 'Kin Hell Fest, Dirty Weekend, Incineration Fest, FOAD Fest as well as many others. We also venture to play the odd festivals in Europe such as Extreme Fest (Germany) and Obscene Extreme (Czech Republic).

So far we have 2 split CD's out and a 5 track EP called "Big Trouble In Little Vagina" (available on bandcamp/bigcartel) all on Grindscene Records. Late July/Early August we enter the studio to record our debut full length and that should be released around Christmas.

We are over the moon to be playing the Bloodstock!! Its a festival that attend every year as fans and have made many friend here over the years. We cant wait to unleash our twisted version of death metal to everyone this year!