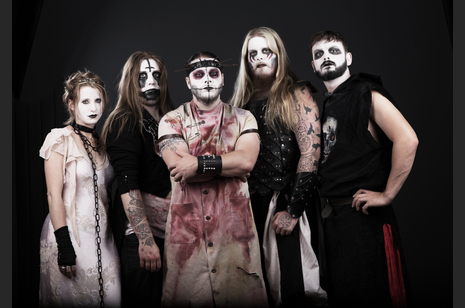 Many years ago in a desolate Lincolnshire town, a band of dubiously termed musicians of Nordic heraldry with a fondness for sticky back plastic decided to go their separate ways, but as a phoenix rises from the ashes a new and perhaps even more glorious band emerged from the dying embers of Thor’s Children (widely regarded as the greatest Blue Peter Metal band of all time) and thus Evil Scarecrow triumphantly exploded into existence.

In the following years the band relocated to Nottingham and evolved through several lineup changes to become the monstrous and stunning apparition that you see today. The current incarnation of the band is version 5.0, featuring Dr Rabid Hell, Brother Dimitri Pain, Kraven Morrdeth, Princess Luxury and Ringmaster Monty Blitzfist. It is in the live arena that the band has really proved their worth. They have gigged relentlessly around the UK for a number of years, captivating and sometimes rather surprising audiences from venues as small as the local pub, as legendary as Nottingham Rock City, as mammoth as the main stage at Bloodstock Festival and as exclusive as a boat sailing down the Thames on the way to the Metal Hammer Golden Gods Awards. Everywhere they play they win new fans. Their passion and enthusiasm ensures they always connect with their audience, who in turn spread the word far and wide.

The unwavering support of their fans has seen Evil Scarecrow win the Bloodstock Unsigned Competition and feature in Terrorizer’s best unsigned band readers’ poll. In October 2013 the fans stepped up once again to ensure the band reached the goal of their first Pledge Music Campaign less than 24 hours after the project went live.
The band shows no signs of slowing down their gigging schedule, with shows across the UK scheduled throughout the coming year following on from their triumphant Main Stage performance at Bloodstock. When they’re invading a stage near you, it's not to be missed!