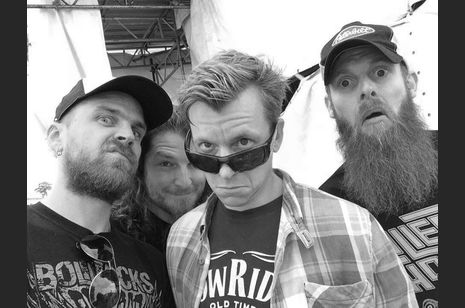 Defined by their monolithic foot-stomping sound that has evolved to combine the expansive low end power of desert rock, with the heavy groove of southern sludgy metal.

Their current EP ; 2015’s ‘Vs Time’ is five fat slabs of heavy that will take you on a bass-bruising progressive journey full of gargantuan riffs, gritty vocals and heavy duty percussion. Released on Bandcamp, iTunes and Spotify, ‘Vs Time’ was strongly supported by online metal press and radio, including TBFM and Heavy Planet’s Band of the Day. The promo video for single ‘Dead Wait’ also received spins from Scuzz TV.

With three EPs under their belts, Jukebox Monkey are heading back into the studio in 2016 to record their debut album with Ian Sadler (OHHMS), in what’s shaping up to be their most ambitious, fluid and grooving work to date...

GREAT BEARD OF ZEUS! Jukebox Monkey could not be more stoked to be playing the awesome Bloodstock Festival 2016. How often do you get to say you played a festival with Corrosion of Conformity, Mastodon and Slayer?! We can't wait to bring some groove to the proceedings so hold your tankards aloft people, we're bringing the party to you!