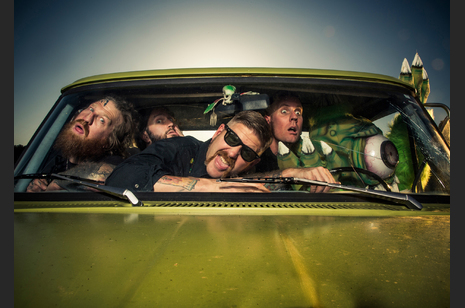 Atlanta-based sludge/stoner/alternative metal outfit Mastodon formed in 1999 around the talents of guitarist Bill Kelliher, drummer Bränn Dailor, bassist/vocalist Troy Sanders, and guitarist/vocalist Brent Hinds. One of the more notable New Wave of American Heavy Metal acts, a genre spawned in the mid-'90s by bands like Pantera, Biohazard, and Machine Head, Mastodon's innovative, lyrically astute blend of progressive metal, grindcore, and hardcore helped position the band as one of the preeminent metal acts of the early 21st century.

Formed out of a mutual admiration for the Melvins, Black Sabbath, Neurosis, and Thin Lizzy, Mastodon signed with Relapse Records (Today Is the Day, the Dillinger Escape Plan, Coalesce, Burnt by the Sun) in 2001 on the strength of a four-song demo. The EP Lifesblood arrived that same year, followed by the group's full-length debut, Remission, in 2002. The album made positive waves in the metal community, but it wasn't until 2004's Leviathan that the band's eclectic brand of proto-metal began to enter the bloodstream of the entire music community. As polished and melodic as it was brutal and genre-defying, Leviathan, loosely based on author Herman Melville's Moby Dick, signaled a turning point in the band's career, appearing on critics' year-end Top Ten lists across the musical spectrum.

Mastodon's newfound popularity eventually landed them a deal with Warner Bros., but not before fulfilling their contract with Relapse in 2006 by releasing Call of the Mastodon, a remastered version of the group's first two demo EPs, and Workhorse Chronicles, a DVD that chronicled the band's story thus far with interviews and concert footage. The band's third album, Blood Mountain, debuted at number 32 on the Billboard charts and received a Grammy nomination in the Best Metal Performance category for the song "Colony of Birchmen." Blood Mountain marked the band's highest chart peak, and set the stage for its long-awaited 2009 follow-up, Crack the Skye. In 2011, the band released the CD/DVD package Live at the Aragon, which was recorded in Chicago during the Crack the Skye tour. Mastodon followed quickly with new material, taking a step back from their more prog-oriented approach on their fifth studio album, The Hunter. It gave them their biggest commercial success to date, hitting number ten on the Billboard chart.

Later in 2011 Troy Sanders took some time out from the band, forming the metal supergroup Killer Be Killed with Dillinger Escape Plan vocalist Greg Puciato, Soulfly's Max Cavalera, and former Mars Volta drummer Dave Elitch. He worked with the group on and off for the next few years; their debut album was eventually released in 2014. Mastodon was still a priority, however. After touring Europe and South America in 2012, they started work on their sixth album the following year with producer Nick Raskulinecz. The album, eventually titled Once More 'Round the Sun, was released in June 2014, preceded by the sludgy single "High Road."