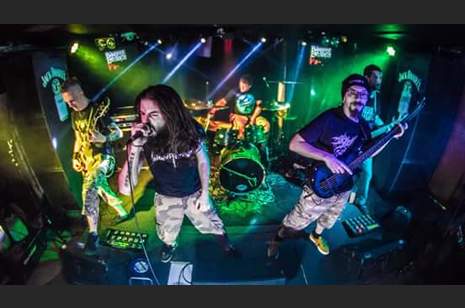 The brain child of Richy Paton (ex Panisia), Burning The Dream started when he and childhood friend Iain Docherty decided to unleash their massive, throbbing.....creativity....upon the world. The guitar wanking duo, with Richy also taking on the role of vocals, were later joined by Martin Gazur (ex Deminishion, ex Stabwound, ex Soviet Union) on drums and so writing and rehearsing began!

Shortly after Burning The Dream began playing gigs, with a host of bassists filling the role.

Bass duties finally found a permanent home deep in the recesses of one Rowan Petch (ex Diementia) and shortly after Richy decided that in order to dedicate himself fully to his instrument that a new full time vocalist should be found.

Unfortunately in the summer of 2015 Martin decided it was time to dedicate more of his time to his family (I know, right?! AS IF family matters!) and so a reshuffle was required. Richy, being a multi talented dick, swiftly continued his relentless withdrawal from the front of the stage and found a new home on the kit, which opened the door to brand new guitarist Greig "The Toastie Postie" Sills (also of Of One Blood). NOW THE WORLD IS AT PEACE!

Burning The Dream will be expanding your views on modern metal, so keep your ears peeled (that's right) for new and innovative riffs and catchy hooks! We'll bring the fuckin' ruckus.

We are honoured to have a chance to play Bloodstock. It has been a long time dream for us to play at such a prestigious festival and finally we get our shot. We would like to thank everyone who has supported us thus far from the bottom of our heart and hope to grow from this and bring our sound to a new audience.

Cant wait to make new friends, meet up with old ones and have one hell of a party.