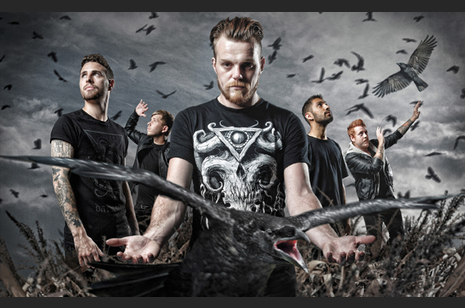 The Raven Age are a melodic metal band from London, UK. The band was established in 2009 when founding members and guitarists, Dan Wright and George Harris began developing their vision of a band that combines contemporary heavy music with powerful melodic vocals to create a dramaUc and unique sound. With plenty of material wri@en they took on bassist Ma@ Cox in 2012 and completed the lineup in 2013 with vocalist Michael Burrough and drummer Jai Patel.

Since becoming an acUve band, The Raven Age have been playing shows all across Europe with bands such as Mastodon, Gojira, Delain, Rival State, Voodoo Six, Wolf, Santa Cruz, BriUsh Lion and many more. They have also made debut appearances at some of the biggest fesUvals including Download, Sonisphere and Moto Clube De Faro in Portugal.

In 2014 the band recorded and released their debut self Utled EP that shot straight to number 1 in the Amazon 'Hot New Releases Chart' and also climbed to number 16 in the 'Top 100 Best Sellers in the Rock & Metal Chart' on Amazon.

The Raven Age have just been announced as support for the mighty Iron Maiden on the ‘The Book Of Souls’ World Tour in 2016! The rest of the 2015 will see The Raven Age team up with Skarle@ Riot in October and a full UK and European tour with TremonU in Nov/Dec.