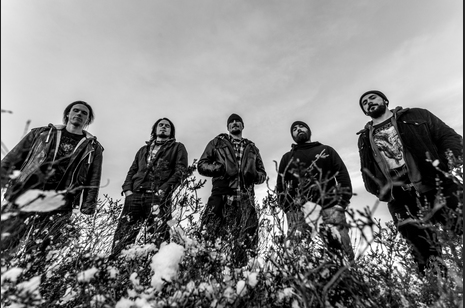 SEED OF SORROW are a five piece death metal band from Inverness in the Highlands of Scotland who are dedicated to producing the hardest, angriest brand of metal possible. The band has been together since late 2012 and comprises of Lewis Goodwin on vocals, Mark Savage on guitar, Nick Laidlaw on guitar, John Murray on drums and Donald Tolmie on bass guitar. "This Inverness brigade put plenty of technicality into their death metal, but the focus is very much on smashing the shit out of stuff, not showing off their widdly bits." (Terrorizer Magazine July Issue 2013).

All five members of Seed Of Sorrow are self taught musicians and we strive to learn and improve constantly as none of us ever believe we've reached the height of our musical abilities. "Our songs cover subject matter ranging from punching the fuck out of people to the pointlessness of existence to the destruction of the earth by the very people who claim to be improving it" (Lewis G, Seed Of Sorrow).

"Originating from Inverness, Scotland Seed of Sorrow are a five piece death metal band. Combining the styles of old school and technical death metal Seed of Sorrow presents a flurry of technical guitar play, crushing riffs and growls notable to the likes of Malevolent Creation, Immolation and Meshuggah. Currently unsigned Seed of Sorrow have a self released EP entitled 'Vice Like Grip'." (Extreme-Metallum by James Weaver)

Seed of Sorrow can be contacted on Facebook for gig bookings, E.P. requests or just some crazy, off the wall metal based banter so get in touch now and look out for us at a venue near you. S.O.S.

It’s truly a honour to be part of Bloodstock Open Air Festival this year. We are looking forward to bringing some Highland Death Metal to the New Blood Stage. And also checking out the other bands on the line up and hope to leave a mark as a band to be remembered! Bring on August!!