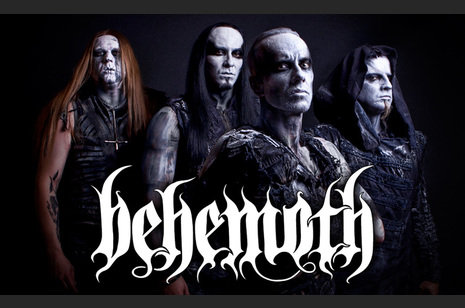 “The Satanist is magic. It’s dangerous. It’s adventurous, and it’s organic,” states Nergal, the driving force behind Behemoth since their inception in 1991, and brief exposure to the band’s tenth album more than supports this statement. While instantly recognizable as the work of the Polish blackened death quartet it takes their sound in previously unimagined and riveting directions. A writhing, densely layered, brutally violent and sinister record, it is quite unlike anything ever unleashed within the canon of heavy music. As such it demands attention, offering ever greater sonic and emotional depths with every listen. “You may hear the title and think it’s very primitive and one-dimensional, and yes it is, but when you look beyond that it’s as primitive as it is complex and multidimensional, and that applies to everything about the record.”
It has been a rocky road leading to the realization of the album. Having dropped 2009’s Evangelion to almost universal critical acclaim they saw it top the chart in their native country and dramatically expand their following around the world, and playing some of the best shows of their lives the band seemed truly unstoppable. But, in August 2010 Nergal was diagnosed with leukemia, stopping them in their tracks. Forced to abandon their ongoing tour in support of Evangelion Nergal was hospitalized, and both he and Behemoth faced an uncertain future. With the search for a bone marrow donor ultimately successful Nergal underwent a transplant, leaving the hospital after six months and beginning down the long road to rehabilitation. “I knew I was pretty much fucked and there was a battle to be won, and I had no fucking idea if it was going to take six months or twelve months or maybe four years, because with cancer you never know. I learned from being in the hospital that there are things in life that you can control and things that you can’t control. The sooner you realize which is which it’s going to make your life so much easier, and since then I started to focus on the right things. I could be determined, I could have discipline, I could have faith, but everything else is not under my control, and it really was a case of just crossing fingers for the best possible outcome. I was fortunate enough that that recovery period was relatively fast, and that I was really strong and very determined to get back into shape made a real difference.”

Rather than immediately getting down to working on a new album, the band – also comprised of drummer Inferno, bassist Orion, and guitarist Seth – set out to complete the abandoned touring cycle for Evangelion, hitting the road for the aptly titled Phoenix Rising Tour. Wanting to prove they were stronger than ever the first show was the only time doubts crept into Nergal’s mind. “I was a fucking wreck, and I almost didn’t make it to the end of the set. The venue was really smoky, and that was stuffing my nose and my lungs, and physically I felt that I couldn’t pull it off. I did, but I was close to passing out on stage. I was literally shocked by this, I remember thinking while we were playing shit, what if I can’t do this anymore? I’m just a human being after all. Going into the next show I had no sleep because of all the nerves and anxiety, but it was fucking amazing. With every following show I would get stronger and stronger and grow more confident, and aware of the fact that yes, we will do this.”
Having returned to full force the band were ready to once more move forward, and they began work on what would become The Satanist. While many bands might be concerned with how to follow up a record as devastatingly powerful – and successful – as Evangelion Nergal faced no such doubts. “I don’t race myself, and I don’t need to prove anything to anyone. Evangelion was a very important record to us, and yes, it was very successful too, but in making The Satanist it wasn’t a point of beating that. The point was to do what was organic, and make a natural and honest and sincere album, and that’s it. Now the record is finished I like to think of it as an album that is just so different that you can’t really compare it to our previous works, which is the best outcome I could hope for.” One thing is inarguable, and that is the record is the most sonically rich and complex released under the Behemoth name. With layer upon layer of sound it has great sonic density, but there is intricacy to this, and nothing is forced or contrived. “I don’t have a kid but I think the process of raising one is comparable: you invest a lot of your energy and effort and wisdom and money and you educate them, but there’s never a one hundred percent guarantee he’s going to become a lawyer and not a serial killer. It’s the same story with the records – we supply the elements but we just don’t know how these elements mixed together are going to come out, and I think it’s fortunate that we don’t have one hundred percent control over it! It makes for something special.”

The title of the record itself is undeniable in its power, and Nergal sees it as capturing the primal wisdom that the band have always tried to maintain. “To me it’s not pretentious at all. It’s very straight up, very sincere, and a devastating, conquering statement. There’s no compromise or bullshit or gimmicks. What I love about it is that it just speaks for itself. On one hand it’s a very black and white title: The Satanist is like a fucking nail through the hand of Jesus Christ, period. No more, no less. But then again, as with everything else you put a hundred people together and ask them what the name The Satanist means to them and you’re going to hear a hundred different opinions, which they can then discuss and fight over.” Likewise, Nergal views the lyrical content of the record as similarly open to interpretation, encouraging this. “There’s a lot of symbolism and reflections and impressions in there, and it’s using millions of metaphors to express a certain very sinister and very captivating atmosphere, but there are no answers. People always like to have a deeper insight into what we do, but that’s not what we want to give with this record. The way I see it is that between us we can make a huge fucking pyre and set the world on fire, but what we’re doing is just giving you the matches, giving you the spark, what you want to do with it is up to you. Personally, if I sat down with the lyrics in front of me I too would probably come up with a lot of different interpretations and concepts, it’s a never ending process, and that’s exciting to me.”

Twenty-three years and ten albums into their career, that Behemoth is still in the ascendant is a statement to their commitment, determination and capacity for writing such powerful music. If ever a band was to go out on a high The Satanist would make for one hell of a swan song, but don’t expect them to disappear any time soon. “I remember before we we had a record deal I was having a conversation with Baal, the band’s original drummer, and we said okay, if one day we manage to record an album and put it out how cool would it be to split up right after that? It would be one record and no more, and there was something about that that had an appeal, but y’know what, it doesn’t work like that for individuals like myself. Hunger has always driven me through life, and I can never sit in one place and relax for too long because I have the need to explore this whole universe in every possible way. Now, over two decades later it’s the same story. I can tell you I have no problems with finishing my career after this record. Just say the title itself: The Satanist. How the fuck am I gonna beat that title? It sounds like the ultimate definition of our art – but then again, I remember that conversation with Baal, and I know it doesn’t work like that, so I know there will probably be other incarnations of our artistic identity, one way or another. All I know is I love being here and now, and I just want to underline that I couldn’t be more proud and happy with my own music. It really drives me through the day, and now I just want to sit back and hear any and all opinions of it.”
BIO WRITTEN BY DAN SLESSOR
Behemoth is: Nergal – vocals & guitars | Inferno – drums | Orion – bass | Seth – guitars
www.behemoth.pl
www.facebook.com/behemoth
www.metalblade.com/behemoth