Band Profile for THE CHARM THE FURY - boa-2016 | Bloodstock 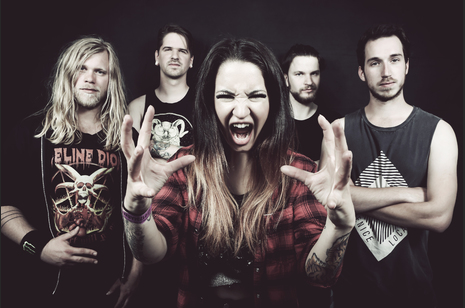 Unique, edgy but charming. The Charm the Fury from Amsterdam, The Netherlands, has brilliantly managed to stand out from the crowd. The band, formed in September 2010, has a unique take on metal and is not only known for its harmonious and heavy songs, but also for their lead vocalist and screamer Caroline Westendorp.

Their first album A Shade Of My Former Self was released in 2013 and got a lot of coverage and exclusives on Metal Hammer, Kerrang!, FHM and Alternative Press. With a strong focus on quality, dynamics and loudness, The Charm The Fury brings something entirely new to the table of heavy metal.

The Charm The Fury performed at some of Europe's major rock festivals, such as the Download Festival (UK), Fortarock (NL), Damage (F) and Groezrock (BE). They toured the UK with "Upon A Burning Body", supported Slipknot, Papa Roach and Marilyn Manson, and performed at the 2015 edition of Graspop Metal Meeting alongside Lamb Of God, Children of Bodom and more!

A new album, influenced by the likes of Pantera and Slipknot, is scheduled for the Fall of 2016 and will set the tone for a completely new sounding The Charm The Fury. Get ready