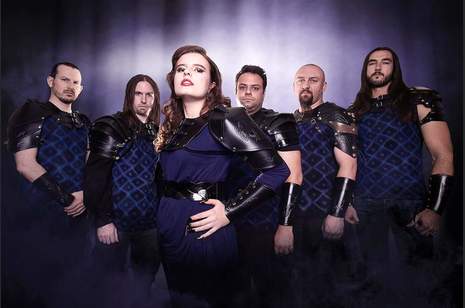 Formed in 2007 in London, England, Pythia was started as a hand selected group of musicians brought together to create music that encompassed their loves for heavy metal, epic classical music, dark literature and heroic tales.

Pythia's sound is best described as a mixture of Thrash, Power and Gothic metal together with epic symphonic keys and soaring female soprano vocals. Metal Hammer once described Pythia as "Like early Nightwish, if Nightwish grew up in the Bay-Area Thrash scene".

The band have released 3 critically acclaimed, Jacob Hansen (Amaranthe, Volbeat, Mercenary, Primal Fear, Evergrey etc) produced albums, Beneath The Veiled Embrace (2009), The Serpent's Curse (2012) and Shadow's Of A Broken Past (2014), through Genepool/Universal Records.

A no-holds-barred, full-on sound and image along with high caliber musicianship and their strong, varied and captivating songwriting has seen the band heralded as one of the UK's top symphonic metal bands.

They have toured/played live in the UK and Europe with bands such as Arch Enemy, Tarja, Leaves Eyes, Sonata Arctica, Ministry, Pagan's Mind, Fields Of The Nephelim, Threshold and Serenity as well as having played Bloodstock festival in the UK twice, Prog Power and Metal festival (Belgium) and Metal Female Voices festival (Belgium).
In mid 2015 the band announced that they were parting company with original singer Emily Ovenden (due to her wanting to concentrate on family, work and other musical commitments) and a few months later, young English singer Sophie Dorman was announced as the new frontwoman of Pythia. Sophie possesses an astonishing voice of massive power and range that brims with passion and emotion.

Pythia will spend most of 2016 writing and recording their 4th album with some select shows and festival appearances along the way.
The Pythian Army will rise and endure!