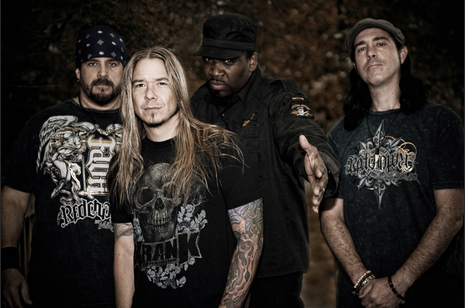 STUCK MOJO
STUCK MOJO blazed the trail for the rap-rock genre by melting their heavy metal-bred Southern heritage with a frontman who bled hip-hop. Formed in 1989 by guitarist Rich Ward, MOJO set out to experiment with this genre-blending musical hybrid and quickly acquired an international reputation as a band able to sonically beat you down, call you names, and help you back up for some more.

As STUCK MOJO’s first release, “Snappin’ Necks,” appeared in the mid-90’s, they were something of a phenomenon to some and a riddle to others. Daring to be different, STUCK MOJO challenged the system both musically and lyrically and, in the process, tore down barriers, prompting one European music journalist to declare, “If Zakk Wylde is the King of modern rock guitar, then Rich Ward is certainly the Duke.”

In 2000, after six albums, eight world tours, years of living out of suitcases and constant friction between the band’s management and the band’s record company, Century Media, STUCK MOJO drifted apart. Rich went on to release several records with other bands (Fozzy, Sick Speed), including a solo record and, after a 4-year hiatus, decided to reform STUCK MOJO, first testing the waters with a 17-date tour of Europe in February 2005. Not only were the gigs incredibly well attended but the live reviews were ecstatic, leading to 4 more tours of Europe and a 6-week tour of the US over the next 16 months.

In March of 2006, STUCK MOJO entered Backstage Studios (UK) with producer Andy Sneap to begin recording their new album “Southern Born Killers”, their first full length release in 6 years. After first making a bold move by making the entire album available, for free, via download, a full-quality version of the disc, including the CD booklet and a limited bonus DVD, was made available for purchase. This “out of the box” gamble paid off and “Southern Born Killers” became one of the band’s most successful releases of their career, garnering STUCK MOJO nice additions to its fan base and prompting a signing with Napalm Records.

Energized by new success and the introduction of the 6’5″ front man and hip-hop powerhouse, Lord Nelson, STUCK MOJO was ready to innovate, invigorate, and devastate the audiences of the world with genuine balls-on-the-floor attitude and energy. Then, in the winter of 2008, STUCK MOJO headed back to Europe for 24 shows in 25 days in support of “Southern Born Killers”. With only enough time for a short US Summer Tour in 2008, STUCK MOJO went back into the studio to write and record “The Great Revival” due for release in Europe on 28 November 2008 (US/CAN: 13 January 2008) on Napalm Records.
Working with producers Rick Beato and Andy Sneap (Machine Head, Megadeth, etc.), STUCK MOJO crafted a collection of songs that explores the band’s cross genre roots by blending Southern hard rock with rap and heavy metal elements in the way that can only be described as STUCK MOJO. No other STUCK MOJO release has ever emphasized the band’s musical roots to a greater extent or offered such an accomplished mix of heavy metal riffs, catchy hooklines, seventies style rock, and a final touch of subtle Southern rock influences from guitarist extraordinaire Rich “The Duke” Ward. While Lord Nelson shares the microphone with rising star Christie Cook, whose vocal interpretations fit in perfectly with the band’s musical concept, it soon becomes clear that STUCK MOJO are back—livelier and more diverse than ever before and very determined to set yet another new standard for independent musicianship. A musthave for fans of Alter Bridge, Faith No More, and early Clawfinger.