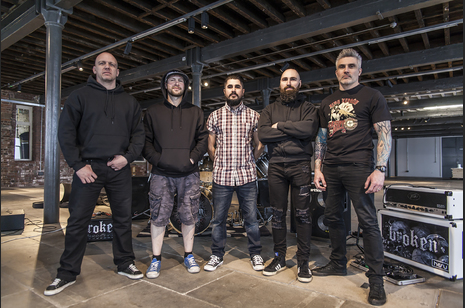 "Broken are your original UK metal band formed in 2010. A series of line up changes led to Paul "Pudge" Johnson joining in 2014, allowing the band to truly find their sound. Pudge, with his ability to shift vocal styles effortlessly bringing killer screams, rapping and huge melodies, joins Neil Morris and Damian Marshall on guitars, Fraser James on bass and Mark Greenwood on drums.

In 2014 Broken released the EP Walking Tall and video to the single We Are The Many featuring your favourite ragga hero Skindred's Benji Webbe. We worked throughout 2015 fine tuning our live performance and unique sound combining crushing riffs, a powerfully tight rhythm section and vocals that are as melodic as they are aggressive. The past has seen Broken play both the Bedroom Jam Stage and Pepsi Max at Download Festival, Ride For Dime Festival and appear on Sky TV UKW Wrestling. But the past is not important. In June 2016 Broken released their finest EP to date, Leaving In Silence, along with the video and single of the same name, securing a slot at Bloodstock Festival and ensuring Broken are back in 2016!"

"We are absolutely buzzing to be invited to play Bloodstock Festival in 2016! Being part of such an important festival, that prides itself on supporting both the underground live scene and also the established live seen, is a huge honour!"