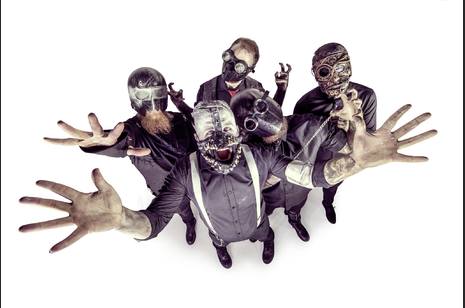 One of the UK's best breaking bands will make their mark in 2016 with the release of their highly anticipated debut album.

Since bursting onto the scene in 2013, ANTI-CLONE have wasted no time in grabbing audiences by the scruff of their necks and laying waste to stages across the UK and Europe.

Now they're ready to step up to the plate and deliver their stunning debut album 'The Root Of Man', released via a hugely successful Pledge Music campaign and PHD.

'The Root Of Man' was produced by Matt Hyde (Slipknot 'All Hope Is Gone' - Machine Head 'The Blackening') and artwork by the sinister Mister Sam (Rob Zombie, Fear Factory).

With backing from Skindred frontman Benjie Webbe ("they could be a ruling force in British metal") and Metal Hammer magazine awarding them 'Hot New Band' status ("likely to be one of the year’s most distinctive debuts"), Anti-Clone's slot at this year's Bloodstock is not to be missed! ("What other opening band could get a wall of death going in their first song?" - Midlands Metalheads)

"We are absolutely thrilled to be playing the Sophie Lancaster stage at Bloodstock this year. Bloodstock Festival is an institution in British metal and we cannot wait to smash our noise into your faces in August!"