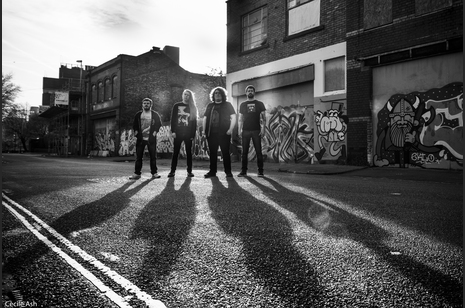 Conjurer are a 4-piece metal band from the Midlands who have fused sludge groove and post-metal intensity to create a progressive sound that defies traditional genre constraints. Debut release due July 1st 2016 via Holy Roar Records.

'Conjurer have made quite the name for themselves in the live arena over the past year or so. It’s almost a rarity in 2016 to find a band who are securing festival appearances and great support slots outside of their local area without a real recording to their name. Yet that is exactly what Conjurer have achieved in their first year as a band. It boils down to the simple fact that they are an incredible live band and people are talking about them based upon these performances. Doing things, the old way. Doing things, the best way.

Now the time is ripe for Conjurer to back this up with their debut mini-album: four elaborate tracks of tumultuous, labyrinth metal that draws upon Opeth at their heaviest, Mastodon at their earliest, Neurosis at their most blunt and Gojira at their most venomous. There is also a decisive energy to this band that belies these comparisons – potentially drawing from acts such as Turmoil, Vision of Disorder and Swarm of the Lotus.

Despite so many lofty touchstones in this bands’ cannon, Conjurer possess a deftness and sensitivity of touch that marks them out as a band that can, and will, effortlessly flit between metal and stoner/doom crowds, whilst giving any death metal and hardcore band a serious run for their money. It’s 2016 – genres don’t exist anymore to the post-broadband generation, and rightfully so. Hail Conjurer.'

'Conjurer are utterly astounded and humbled to be playing at Bloodstock 2016. We'll be playing a festival with some of the bands that have influenced us from day one and just to say that out loud is a bit crazy...now to hope we don't clash with Gojira...'