Band Profile for THE KING IS BLIND - boa-2016 | Bloodstock

THE KING IS BLIND 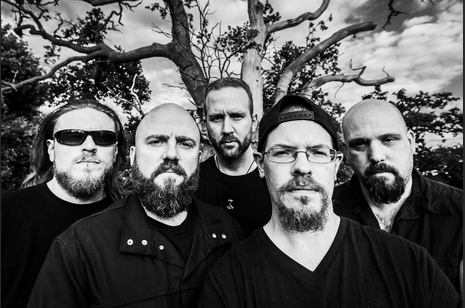 The King Is Blind

The roots of The King Is Blind go back over twenty five years, with school friends Stephen John Tovey and Lee James Appleton sharing a discovery of Heavy Metal, skiving off lessons to spend hours searching through old rock and metal vinyl at their local record store, Time Records. It is a bond that, in 1995, saw them form their first band together, Entwined. The band recorded one album for Earache Records and toured with the likes of Morbid Angel and Orange Goblin. Entwined also played several shows with fellow East Anglians, The Blood Divine, where a friendship with TBD guitarist Paul Ryan, that had begun in Paul’s days with Cradle of Filth, was furthered.
Neither Entwined nor The Blood Divine were to last, with both bands dissolving around the turn of the millennium. Paul, Lee and Steve remained firm friends and it was many years later, in 2013, that The King Is Blind was conceived. With a riff.

The years of listening to those Celtic Frost, Candlemass, Earache and Peaceville records  bought in Time Records were ingrained in their brains, and what was to become the first TKIB songs were born. Instinctively, Lee reached out to Steve first with “I have an idea…” and a conversation later, a concept was created.
Spending the summer of 2013 working on four songs that would form the promo/demo ‘Bleeding The Ascension’ the pair made two songs available online to test the water. The response was immediate and overwhelmingly positive. Within days Ryan-Reader had been in touch offering to help, an offer that led to Paul joining the band. Paul recommended drummer Barney Monger of Extreme Noise Terror, who formed an instant fit. A first rehearsal with Ryan-Reader and Monger saw creative sparks fly, and the track ‘A Thousand Burning Temples’ was written in that first session.

When establishing the parameters for The King Is Blind, the quartet knew that to be restrictive would be self-defeating.  As such, the tag Monolithic Metal was used to cover a multitude of metal sins. With over 45 years of metal heritage to draw upon, there would be no restraints but their imagination and the demands of the song.
Writing continued in a flurry, live shows were booked, an EP was recorded and a striking image-laden lyric video, produced by Sam Scott-Hunter (Motõrhead, Bring Me The Horizon) was unveiled for the track ‘A Thousand Burning Temples’.

The band capped a memorable 2014 with an impressive “bludgeoning” (Metal Hammer) set at Bloodstock Festival and the release of the critically acclaimed ‘The Deficiencies of Man’ EP via Mordgrimm. The EP earned the band KKKK in Kerrang!, and led Terrorizer to proclaim it possessed “the groove of old school Death Metal, yet appreciative of newer styles with deliciously doomy riffs for good measure”. Respected site Echoes and Dust hailed “some of the most exciting tracks heard in Death Metal for a while”.

The band closed out the year with successful supports with Fen and Winterfylleth before continuing to establish a burgeoning live reputation at HammerFest, Meh Suff! Winterfest (Switzerland) and Temples Festival in the first half of 2015. TKIB closed the year with a run of shows with Winterfylleth and Voices and are booked to open the prestigious Terrorizer stage at Damnation Festival.

‘Our Father’ – An Epic Concept Album

“It’s important we excel live, and it’s great we’re building that live reputation, but first and foremost we are a studio band” opines Tovey. “And all of this will be fo r nothing if we haven ’ t deliver ed on our debut . We put a lot of pressure on ourselves, and were exceptional ly critical and meticulous in the planning and writing of ‘ Our Father ’.
“ Myself and Lee knew from the outset it was going to be a concept album , so we talked at length about what type of concept we wanted it to be . We both felt that it had to consist of songs that would ma ke sense as stand - alone tracks, so i t felt right for it to follow the lines of a Seventh Son of a Seventh Son ; something truly epic in scope, that wasn’t constrained by any barriers that would stop either the music or lyrics telling a complex story. ”

The album had to be mapped and flow logically, with the music matching the themes and emotions of the lyrics and story. In talking about the concept, Appleton pushed Tovey to resurrect an idea the vocalist had raised during the recording of ‘The Deficiencies of Man’: to tell the story of Satan, but to take it beyond what has been covered in literature, to bring it to life, with Satan as a true anti-hero.

“ This isn’t a fantasy story, neither is it just a narrative… ” adds the lyricist. “ E ach line of each lyric has to work on at least three levels – to further the concept around man being fundamentally flawed, to further the overarching story and also to carry a separate stand - alone message in each song.
“ It isn’t just about Satan vs God, or taking sides – everythin g is gr ey, there is no black or wh ite. Let’s be clear. It is not anti - Christian. It is not anti - religion. It is definite ly not anti - faith”, continues Tovey, “ but ‘ O ur Father ’ is against how people use religion as a banner and a mask to commit atrocities. I am pro - equality and pro - diversity, and we stand against oppression and division .

“The lyrics high light the deficiencies of man; t hat despite thousands of years of existence, we still can’t tolerate difference. As a race we have lived in constant conflict, over land barriers, or over which God is “Better”, over whose scripture is “right”, over interpretations and misinterpretations of ancient teachings, with pride, eg o and greed fuelling c onstant unnecessary conflict.

“ The starting point for the concept for the al bum was t he song ‘A Thousand Burning Temples’ on The Deficiencies Of Man is about purging clean the human race of people who sin in the name of religion , and of the truly cor rupt , about starting again. But in doing so, there was a re alization that even if we did , humanity is so fundamentally fucked that we wouldn’t learn. We haven’t done so far f rom our mistakes. We don’t teach our next generations, we don’t learn from history .
Using a host of reference materials, such as the Bible, Paradise Lost, Paradise Regained, The Last Temptation of Christ, the Book of Revelation, The Holy Blood and The Holy Grail and The Divine Comedy amongst others, Our Father takes that premise and looks deeper into it.

“ It’s an allegoric tale based in the telling of Satan ” Tovey self-consciously chuckles. “ It ’ s developing him as a literary character, and his story from his genesis through the genesis of man to resurrection , to highlight that in us all is the inst inct to commit th e seven sins; t hat, despite the incredible potential in each of us, a pathy and pride, mis - teachings , and this horrific , selfish world , take over. The true creator of mankind is not God, but Our Father is Satan, and in us all, from his creation of Adam as a gift to God, through to his seed implanted in Eve at the point of the Fall of Man, are these seven failings.
“ It isn’t our fault, our core is flawed, but yet we still haven’t learned how to learn – how to evolve ”

Since completing the recording of the album, the decision was taken to expand to a five-piece with the addition of Ceri Monger.
“The album has required some very challenging vocal parts – in deference to King Diamond there are seve ral different lead vocal styles and inflections for the different characters all within the Extreme metal styles . W ithout the bass I found I could really concentrate on giving each line the energy and ferocity it deserve d ” confirmed Tovey.

“We're thrilled to announce that we have enlisted Ceri Monger as our new bass player, leaving Steve free to stalk the stage like an unleashed apex predator” stated Appleton via the band’s Facebook page. “Some of you will know Ceri from his work in one of the UK's truly great bands, New Model Army , others will know h im as the brother of TKIB drummer Barney. We thank Justin and the rest of the NMA guys for their understanding in allowing Ceri to spend some of his down - time with a bunch of miscreants, such as we are. With his sublime musical intuition and ebullient disposition, we look forward to sharing some great times with him.”

AND WHAT WILL BE:

All of which brings us to today, and the exceptional debut album Our Father , which is to be a flagship release celebrating the relaunch of one of UK metal’s most prestigious labels Cacophonous.

“It’s a serendipitous full circle” states Tovey. “ The Principle Of Evil Made Flesh ( co - written by and featuring Ryan - Reader ) was a n important statement by 6 guys from our town, which meant a lot to us. It stands as one of the greatest British metal debuts of all time, and it was released on Cacophonous, one of sev eral seminal releases they had.”

Ryan-Reader adds: “It feels good to blast out some death metal riffs again, and I’m delighted Cacophonous, in their “resurrection” wan t to put the record out. It marries with the concept of the album, of the Beast re - emerging, and it’s a great closing of the circle for me. I couldn’t think of a more fitting choice for such ungodly worship.”
“Cacophonous has always had a reputation for uncovering some truly remarkable new talent, ” concludes Tovey, “a nd w e’re delighted to continue the legacy not just of Cacophonous, but of British metal. Bands like Napalm Death , Cathedral , Paradise Lost, and My Dying Bride et al exploded out of the UK clo sely followed by that Cradle of Filth debut. That is the full intention of The King Is Blind , for ‘ O ur Father ’ to be an album that enhances the heritage of British metal. ”

The King Is Blind