Band Profile for WITH THE DEAD - boa-2018 | Bloodstock 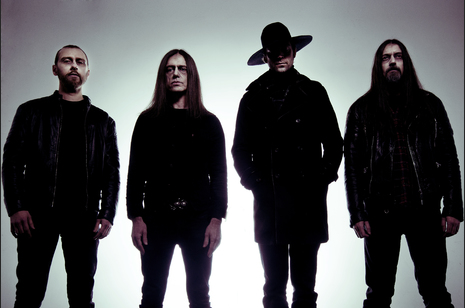 Lee Dorrian - vocals
Tim Bagshaw – guitar
Leo Smee - bass
Alex Thomas – drums
Supergroup is such an erroneous term – images of bored playboys pissing on their legacy spring to mind – but the members of With The Dead have a history of creating criminally good records as long as your arm. They’ve all served hard time in the subterranean worlds of Doom and the heaviest forms of Metal and have now reconvened to surpass previous projects. They’re back – and this time the aim is to maim.
With The Dead were formed by the founding rhythm section of occultist Doom overloads Electric Wizard: guitarist/bassist Tim Bagshaw (also a current member of Serpentine Path) and drummer Mark Greening, a pair once notorious for the sheer brute heaviness of their bowel-shaking sound and early extra-curricular activities that involved excess, injury and low-level criminality (arrests for the theft of a crucifix from a church roof and drunkenly robbing an off-licence to name but two).
Due to various reasons, Greening was dismissed from the group shortly after the album was released. His replacement is former Bolt Thrower skin batterer, Alex Thomes. Joining him is full-time bassist, Leo Smee, formerly of British Doom pioneers Cathedral. Having performed both bass and guitar duties on the album, Bagshaw will now concentrate solely on six-string savagery. Completing the circle is frontman Lee Dorrian, co-founder of Cathedral, former frontman with grindcore legends Napalm Death and owner of Rise Above Records, the UK’s finest independent purveyors of all sounds heavy and underground, whose stable of bands include Ghost, Uncle Acid & The Deadbeats, Lucifer, Blood Ceremony and Witchcraft. Having been in business since 1988, Rise Above is also one of the most enduring.

“There's nothing to prove, but plenty to express,” says frontman Lee Dorrian. “A lot of negativity has been thrown at us individually from various sources over the past few years. Instead of trying to compete with the people that have stabbed us in the back, expressing our disdain through music is a much more powerful response. There have been rough times in my personal life and some dour emotions needed to be exorcised. So, yes, With The Dead is the perfect vehicle for these exorcisms to be performed.”
Like the product of some sort of alchemical alignment or a diabolical modern demon summoned by a whispered incantatory spell, With The Dead formed on All Hallow’s Eve 2014. They worked quickly and the result is a six-track, self-titled debut broadside that draws on the members’ rich musical legacy but without ever taking a backward step. Rising like a fecund creature from the fetid bogs of old England, With The Dead is a malevolent beast that lurches and staggers, flattening everything in its path. Guitars moil and curdle, bubbling up through the loam like black tar, while existing fans will surely welcome the return of Dorrian’s distinctly hateful vocals.

“There was no specific criteria,” says the frontman. “We just set out to make the most devastatingly crushing record possible. Personally speaking, the way we worked on the material wasn't much different to how I've worked on things in the past. Tim had a bunch of ideas, which him and Mark jammed over and over, whilst I sat at home with them and then came up with some lyrical responses. I didn't contemplate anything too much and the songs were written very quickly. It was instinctive. I think this gives it all a freshness, a sense of urgency.”

Here each song is an epic, With The Dead saying more in six or seven minutes than some bands can muster in their entire careers. Check out the sneering, sardonic Living With The Dead as it moves through a series of darkening moods or the primordial slithering musical morass of hellish opener Crown Of Burning Stars that wants nothing less than to rip out your jugular with jagged riffs that snarl against a drum-quake that sounds like the falling columns of crumbling temples.

This is the sound of three lives, three blackened perspectives: “The voices inside my head, the anguish in my soul and the death I see around me” is Lee’s explanation of his lyrical influences, though certain cinematic horror films remain another touchstone: “You can't beat the underground Euro horror classics from the 60's/70's for a continual source of inspiration. You could say that With the Dead is the soundtrack to our own personal hell.”

And what a soundtrack it is. Doom Metal – call it what you will, but like a rusty chainsaw cutting through a twisted black vortex, With The Dead play with killer intent and a sense of – dare we say it – soul. A sickened, life-soiled soul, but one nonetheless. Recorded at Orgone Studios in High Barnet, London, with producer/engineer Jaime Gomez Arellano in late March/early April 2015, With The Dead’s vocals were then added in two very short evening sessions in April and May 2015.

With The Dead rides roughshod all the weak sounds of its contemporaries. With its mid-song breakdown and “Fuck you!” clarion call The Cross oozes tar-black malevolence and by the closing, crashing chords of Screams From My Own Grave, a song of horror that unravels at its own torturous pace, any listener will be left battered on the floor, bludgeoned into submission by With The Dead’s musical brutality. A new era is upon us.