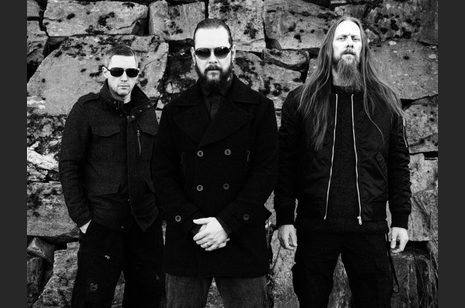 Eventually there comes a time when the hype about a band becomes superfluous, and their status alone speaks volumes. Such is the case with Emperor, the black metal gods hailing from Telemark, Norway. Emperor has become known as one of the originators of symphonic Black Metal that Norway is internationally renowned for. Their cult album “In the Nightside Eclipse” has been ranked among albums like Slayer’s “Reign in Blood” and Venom’s “Black Metal” as a definitive masterpiece of our time.

Beginning life as a trio in the spring of '91 with Samoth (drums), Ihsahn (guitar/vocals) and Mortiis (bass), the band quickly recorded and circulated the now legendary "Wrath of the Tyrant" demo. It was this demo that brought them to the attention of the then still-fledgling Candlelight record label. A deal was inked, Samoth moved to guitar and Bard Faust was recruited for the now vacant drum stool. By the end of 1992, the band had recorded their half of the "Emperor / Enslaved" split CD which surfaced early the following year. Mortiis departed, and was later replaced by Tchort.

The press response was justifiably excellent and by the summer of '93 Emperor were recording once more, this time working on their debut full-length album "In the Nightside Eclipse". By the time of the albums release in 1994 they had become without a doubt one of the most important bands in the genre, gathering worldwide critical acclaim and a rabid fan base to match.

In autumn of '93 a series of headline-grabbing events took place, which lead to turbulence within the scene, causing Emperor to suffer some instability within the bands line-up. Despite these events, the entity of Emperor would come out even stronger in the end. Eventually a new permanent line-up was announced. Alver had replaced Tchort on bass, and Trym (ex. Enslaved) had replaced Faust on drums. The bones of what would become their most epic and majestic material to date were taking shape.

By the end of '96, now fully prepared and rehearsed, they went back into the studio. First the "Reverence" EP announced their return to the fold, followed up in early '97 with what is without doubt one of the most ambitious and important black metal releases to date..."Anthems To The Welkin At Dusk,” an album of epic savagery! Not only beautiful, but bestial in it's wide ranging scope. The press agreed. Not only was "Anthems.." featured in almost every "album of the year poll" across the globe, but actually won the album of the year in both Terrorizer (UK) and Metal Maniacs (USA).

Since the release of the genre defining "Anthems.... " album, things were active in the Emperor camp. Following a couple of tours in 1997, and appearances at Dynamo and Milwaukee Metalfest in1998, the band announced that bass player Alver would be leaving. As a result of this, Ihsahn handled all bass duties on the upcoming “IX Equilibrium” album.

“IX Equilibrium” was their single most breathtaking vision to date. Surpassing even the mighty "Anthems..." for its sheer scope of diversity, the album utilized elements from their traditional metal roots, operatic vocals and of course their trademark symphonic soundscape.

With the success of “IX Equilibrium,” Emperor set out to conquer new territories as a touring band. They toured Europe as special guests for Morbid Angel, headlined the US on their 1999’s “Kings of Terror” tour, and also appeared at various festivals. During this period Emperor recorded the live album and full-length DVD, “Emperial Live Ceremony”, which to this day stand as a strong testimony to Emperor’s mighty live performance.

In 2001 Emperor released what was to become their swansong, “Prometheus – the Discipline of Fire Demise.” An epic and progressive metal album that once and for all marked Emperor as one of the most adventurous and gifted Black Metal band of all times. With the release of “Prometheus…” the band also announced their departure as an active band. “The Emperor is dead, long live the Emperor” roamed the metal world. However, the legacy of Emperor was held high by their loyal fan base, and since the bands departure, their credibility has only grown stronger. In 2003, the “best-of” double album “Scattered Ashes – A Decade of Emperial Wrath” was released, and celebrated many of the fine moments of Emperor’s career.

In 2005, Emperor took the metal world by storm at a surprise show in Oslo when they announced that they were reforming for a few selected reunion shows in Europe and USA.

Come 2014, the band will celebrate the 20th anniversary of “In The Nightside Eclipse”, with a few exclusive performances. Beyond that, the future, as ever, is a mystery waiting to be unravelled…