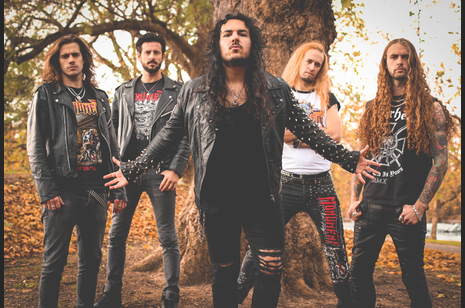 Formed in the streets of East London by vocalist Peter Ellis (Ex- White Wizzard), MONUMENT is bringing back a sound that has been missing from the UK for nearly 30 years… True British Heavy Metal! With thunderous, melodic bass tones, dual guitar harmonies, rock-solid drum beats and signature falsetto wails, the band is determined to make a difference in today’s Metal scene and is celebrating a sound that is rooted in melody and good songwriting that will inspire a new generation of Metal fans. True Metal is back in the Empire and MONUMENT will undoubtedly be the band at the forefront of this new wave.

In 2017 Monument was invited at the Rock Hard Festival and were celebrated from the audience.

The third studio album is planned for 2018.

“Renegades” was first released in May 2014. The album was produced and mixed at Angry Bee Studios, London, Additional mixing and mastering was handled by Scott Atkins (Cradle of Filth, Amon Amarth, Behemoth). In this amazing debut album, MONUMENT is bringing back a sound that has been missing from the UK for nearly 30 years… True British Heavy Metal! Featuring vocalist Peter Ellis (ex member of NWOTHM heroes White Wizzard) as well as Ritchie Falkner (Judas Priest) as a guest guitarist, in the song “Rock the Night”, “Renegades” is a melodic, yet heavy, true metal album that will bring MONUMENT at the forefront of the rising new wave of True British Heavy Metal. Last, but not least, the front cover artwork was designed by Stan W. Decker (Blackmore’s Night, Stryper, Timo Tolkki’s Avalon etc). In 2015, the band signed a deal with ROAR! Rock Of Angels Records and in May 2015 the album was re-issued in CD format. In September of 2015, Rock Of Angels Records released a vinyl edition of “Renegades” in 300 limited 12” copies.

The bands amazing second album “Hair of the Dog” was released in June 2016 and caused an overwhelming reaction throughout the audience and the press as well.
• The album was voted as 13th best album of the year 2016 at the Readers poll of the “Deaf Forever” Magazine
Some benchmarks from the July/August issues of major magazines:
• 3rd place of 60 at the sound check at “Deaf Forerver”. • “Metal Hammer” Germany sound check place 7 of 25 • “Rock Hard” Germany sound check at place 5 of 46 (Dynamite) • “Rock Hard” Italy Dynamite of the month • UK “Powerplay 9/10, Terrorizer 8/10 • High rates and markings throughout all print and digital media in Europe • Full promo report (160 pages) available on request.

The album was mixed and mastered again by Scott Atkins and the artwork designed by Stan W. Decker.