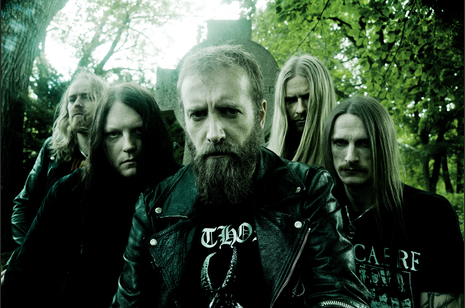 Bloodbath formed in 1998 when, one evening, friends Mikael Åkerfeldt (Opeth) - Vocals, Anders Nyström (Katatonia) - Guitars, Jonas Renkse (Katatonia) - Bass, Dan Swanö (Edge Of Sanity) – Drums, thought it would be good to thrash out some classic death metal in the style of early Entombed, mixed with some of the US Florida death metal scene bands. Quite simply, Bloodbath was born out of this shared admiration for quality death metal in the old style & the guys quickly realized that they could churn some ugly metal out to a pretty high standard. From this one session the Breeding Death EP was written; the songs naturally & spontaneously coming together, and subsequently released in 1999.

Upon releasing Breeding Death, Bloodbath described their style as "a tribute to the old-school death metal that reigned in the late '80s and onward." The response to the EP's three songs was tremendous. Metal Maniacs hailed it as "the collective effort of Sweden's most prolific and talented power hitting songsmiths… Finally, a super group has taken the idea of praising the glory years of death metal...and further, this super group has done the right thing by pooling its abundance of talent to form something new instead of falling victim to the stylistic trappings of the retro movement."
It was two years later that Bloodbath were ready to unleash their debut album upon the world, to be titled ‘Resurrection Through Carnage’. Speaking of the material, Mikael Åkerfeldt (who let loose his corrosive throat on the entire album) calls it, "ten tracks of the purest form of winter like death metal"; an album of old-school head banging bliss that recalls the glory days of Swedish savagery at the dawn of the '90s.Featuring the same lineup as the EP, the album was greeted with much critical acclaim, quickly establishing Bloodbath as one of Scandinavia’s top death metal acts of the time.

And the nightmare continued! Swedish Bloodbath, mostly wrongly referred to as just a retro project or all star outfit, got fiercely back on the metal map with a new album. Very suitably entitled Nightmares Made Flesh (2004), Bloodbath were determined to prove all of those wrong who thought we were dealing with a short-lived and rather fun-orientated back-to-the-roots unity here. Åkerfeldt had recently opted to abandon the band’s ranks due to his busy schedule. After intense research among befriended and likeminded musicians, Bloodbath could proudly announce their new line-up entries of vocalist Peter Tägtgren (Hypocrisy, Pain) and drummer Martin "Axe" Axenrot (Opeth, Witchery) behind the kit as Swanö switched to guitar.  This new musical set up added a lot of challenging variety and fresh intensity to Bloodbath's compositions (as well as the long-awaited ability for the band to finally play live shows), as easily witnessed on the featured 12 new tracks of Nightmares Made Flesh.  Recorded with producer Jens Bogren in Örebro, Sweden at Fascination Street (Katatonia, Opeth, Soilwork, Amon Amarth etc.), this striking album gathered the best elements of both the Swedish death metal old school as well as the magic brutality and technical edge of US-Style death metal, highlighted by Tägtgrens heaviest, most intimidating vocal delivery ever as well very organic, full-on pounding drumming by Axenrot, into an irresistible, breathtaking mixture which will leave no follower of brutal metal questioning Bloodbath's value and qualities.

Bloodbath revealed that their live debut, conducted by a revised cast of musicians, would be held at the 'Wacken Open Air' festival in Germany, August 2005. However, Peter Tägtgren was to back out, due to conflicting schedules, and the band announced Mike Åkerfeldt would make a brief return for the gig, which was a resounding success. One year after the Wacken gig, however, the band decided to part ways with Dan Swanö and replaced him with Per 'Sodomizer' Eriksson (21 Lucifers, Genocrush Ferox).
Peaceville Records had become increasingly impressed by the band & a deal was swiftly struck. The first offering was a relentless slab of pure death metal mastery in the shape of the EP ‘Unblessing the Purity’ in March 2008, released initially to a limited quantity online only. Even with such a low key release the return of Bloodbath was met with huge acclaim. Unknown to almost everybody, even the band’s label, was the surprise vocalist – the return of Mikael Akerfeldt with his unmistakable & characteristic death-growl lending the music a perfect edge.

The previous Wacken show from 2005 had also been filmed as a rare document of the band live & was released on Peaceville Records as a CD/DVD set in 2008. Entitled ‘The Wacken Carnage’, the cover artwork was a pure horror movie inspired masterpiece once more from Travis Smith, perfectly reflecting the coldness & brutality of the band.

While fans worldwide were chewing on the flesh of ‘Unblessing the Purity’ & the savagery of ‘The Wacken Carnage’, the band had been busy composing for their next full-length album, which was recorded Spring-mid 2008 at Park Studio Stockholm, & then at Ghost Ward studios with David Castillo. Shortly after, Bloodbath made a return to the live setting with a couple of appearances on the festival circuit, at Party.San in Germany & Pellavarock, Finland, showing the band as a true force to be reckoned with in extreme metal circles. Retaining the same line-up as the EP, Bloodbath prepared to propel death metal into a whole new darker dimension with ‘The Fathomless Mastery’, & a new classic of death metal was born.The Fathomless Mastery’ saw release in October 2008 & was a huge success for the band. A relentless torrent of brutality giving Bloodbath numerous year-end accolades. Bloodbath continued to play a string of festivals in support of the album & beyond, including a show at the UK's infamous Bloodstock in 2010. This gig was to become the centerpiece of the band’s next release, ‘Bloodbath Over Bloodstock’ which showed the band’s relentless live onslaught, as well as offering an insight into the workings of the band with additional interviews, plus extra live footage.Following the release of the DVD, it was reported that vocalist Mikael Akerfeldt had left the band & a replacement was shrouded in mystery, with several rumours and reports on who would step in. Whilst the speculation was spreading, the band entered the studio to create their ultmate masterpiece, with recording commencing in the spring of 2014, and release set for later in the year.