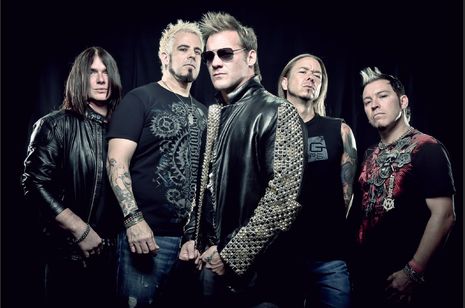 Fozzy has always been about one thing: bringing good times back to rock and roll. In every incarnation of the band, from the Mongoose McQueen era to the present day, Chris Jericho and Rich Ward have been rocking the socks of fans all over the world, reminding all who see them that rock and roll is about invoking dirty, sweaty, loud, spandex-clad jubilation.

Ward is one of the most versatile, underrated riffers in rock and metal, and has been since being a founding member of Stuck Mojo, a band still known as being one of the innovators of the rap metal genre. In 2000, Chris Jericho, already known the world over for his legendary professional wrestling career, sat in on a few Fozzy sessions before becoming a permanent Fozzy fixture at lead singer.

Jericho’s vocals and passion for music makes one wonder just how he is able to find the time to excel in pretty much everything he does. His limitless talent, combined with the music mind and chops of Rich Ward, created the “Unstoppable” Fozzy, a band destined to steal the hearts and virginity of her eventual fanbase.

Fozzy inched up the metal ladder (Jericho knows a thing or two about ladders) after releasing four progressively popular studio albums. However, it was 2012’s Sin & Bones, which featured the single “Sandpaper”, that found the band reaching a level of legitimacy that allowed a mass audience to drink in the hardcore, heavenly noise they bring to rock’s supper. Sin & Bones eventually reached #143 on the Billboard Top 200 Chart. In promotion of the album, Fozzy would tour with rock giants such as Metallica, Shinedown, Avenged Sevenfold and British metal legends Saxon. Not only were their diehard fans bowing at the altar of Fozzy, but music industry icons were now noticing that they were not only legitimate, but they were going to be cemented into the crux of the industry.

Fozzy would go on to release Do You Wanna Start A War (produced by Ward) in the summer of 2014. It features twelve tracks, including the hit singles “Lights Go Out”, the title track, and the ABBA (your eyes do not deceive you) cover, “SOS”. “Lights Go Out” received a massive response from radio and was the highest charting single of Fozzy’s career at the time. It would also eventually become the theme song for that year’s WWE SummerSlam pay-per-view, and blared in sports arenas across the country. To promote the album, Fozzy performed at Rock on the Range, Carolina Rebellion and Rockfest. Then they supported Buckcherry, hosted a sold out record release party at Hollywood s world famous Whisky A-Go-Go, toured the US with Theory of A Deadman, and did a successful headlining run both in North America and Europe.

Now, Fozzy has their sights set on their Judas Rising Tour, which kicked off in Virginia Beach, VA on May 5. Fans will get to bang their heads to the hit “Judas”, which hit #1 on the ITunes Metal Chart and #5 on the ITunes Rock Chart, along with their newest release “Drinking with Jesus”. Once again, Fozzy is setting out to force fans to dial back into the art of rock and roll. It’s time for fans to fasten their seatbelts, ease the seat back, and let Fozzy delight and excite you. It’s time to remind the world that not only is “Judas Rising”, but so is Fozzy’s stamp on the world of music.