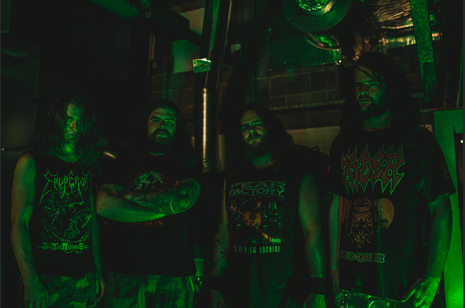 Body Harvest are a 4-piece Death Metal band from Bristol UK who attack the listener with a faster and more intense take on traditional Death Metal. Formed in December 2011 by guitarist Jake Ettle-Iles and Gareth Nash, Body Harvest quickly became one of the UKs essential Death Metal acts, playing all over the country including supporting the likes of VITAL REMAINS, HOUR OF PENANCE, CEREBRAL BORE, AURA NOIR, EXHUMED, ANNAL NATHRAKH and GORGUTS as well as touring with Greece’s MASS INFECTION and Italy’s HIDEOUS DIVINITY. Body Harvest released their debut album FUTILE CREATION through GRINDHOUSE MUSIC on 21st April 2014. All the original 1,000 copies of FUTILE CREATION quickly sold out with reviewers praising the intensity, song writing, precision and professionalism of the album. Now Body Harvest smash their way into 2018 with the release of new singles HIERARCHY OF GRIEF, APOCALYPTIC ABOMINATION and THE PROPHET from their upcoming album PARASITIC SLAVERY. With the release of PARASITIC SLAVERY imminent you can guarantee Body Harvest will be a force to be reckoned with in 2018!

We are beyond stoked to have won this year’s M2TM and to playing at the UKs best heavy metal festival Bloodstock! All 4 members of Body Harvest attend Bloodstock every single year so words cannot express how honoured we are to be on the bill. We would like to thank everyone who has supported us over the years as this would not have been possible without each and every one of you and also thank Simon Hal for giving us this fantastic opportunity. Check us out on the Newblood stage for some fast and intense Death Metal fury!