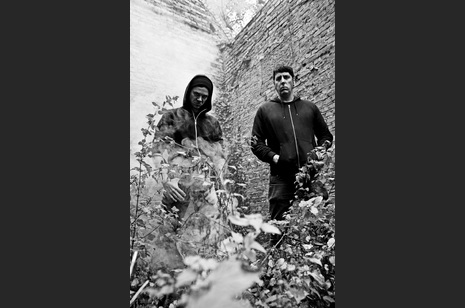 Ever since their inception in early 2013, Northern Germany's two-piece monster, MANTAR, has been recognized as one of the hardest working bands in the extreme metal underground. Melting the most sinister elements of black metal, doom and punk through an unfiltered lens of pure primal rage, MANTAR have quickly proven to be louder and more ferocious than most bands twice their size. The half-German/half-Turkish duo, consisting of vocalist/guitarist Hanno Klaenhardt and drummer Erinc Sakarya, self-released their first 7" single in late 2013 which directly led to a deal with renowned, international metal label Svart Records to record their full-length debut. Recorded in 2013 and titled »Death By Burning«, the album is a raw, self-produced, and 100% DIY display of power.

Death By Burning« was released to immense critical acclaim in early 2014 and appeared on numerous year-end best-of lists including Metal Hammer, LA Weekly (US), Exclaim (CA), MetalSucks (US), Terrorizer (UK), Metal Injection (US) and many more. The success of »Death By Burning« allowed MANTAR to bring their extremely intense, dynamic live shows all over the world including several European tours, two US tours and appearances at renowned festivals such as Roadburn (NL), Wacken Open Air (D), Party San (D), SXSW (US), Maryland Deathfest (US), Temples festival (UK), Oya Festival (N), Getaway Rock (S), Jalometalli (FIN), The Fest (US) and numerous others. By the end of 2015 the band played more than 160 shows in 20 countries.

2016 will be an even busier year for the “Gruesome Twosome” as they prepare to release their highly anticipated new record this April. This evil dose of aural hatred entitled Ode To The Flame« will be released worldwide via Nuclear Blast Records and is the ultimate display of raw sonic power. MANTAR are already confirmed for numerous festivals around the world including Hellfest (F), Tuska (FIN) and California Deathfest (US) and are on par to bring their scorching live assault to even more corners of the earth throughout the year.