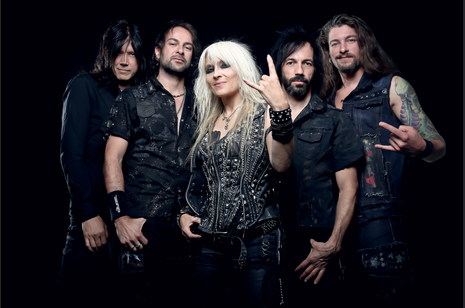 On June 24th 2016 DORO Pesch released her highly awaited, brand new Live DVD / BD / CD “Strong And Proud – 30 Years Of Rock And Metal” (Nuclear Blast). This masterpiece not only offers the stunning anniversary concerts in Wacken, New York, Moskau and DORO´s hometown Düsseldorf, Germany, but it also reveals “Behind The Curtain, Inside The Heart Of DORO”, a great music documentary, which allows deep and exclusive, behind the scenes views into DORO´s (tour-)life.
On May 2016  DORO was invited to Las Vegas to the “Vegas Rocks Award Show”, where she was honoured with the fabulous “Metal Goddess And Legends Award”.  By far not the only highlight for the now officially crowned  Rock and Metal Goddess in 2016: after a successful US-Tour in February and March, DORO hit the stages as “Special Guest” of the 16 Rock Meets Classic shows in Germany and Switzerland, where she introduced her latest hit single “Love´s Gone To Hell” to a total of over 110,000 spectators in April. And since march 2016 DORO runs her own German radio show at ROCK ANTENNE called “DORO´S ROCK SHOW”, where she presents her favorite music every first Sunday each month.

And then – after a whole set of European Summer festivals – DORO heads of to another US-Tour, before she finishes a super successful year 2016 with her huge “Love´s Gone To Hell”-Tour in November/December.

DORO is a living legend! The entire world knows it, since the “Queen of Rock & Metal” received her first ever “Legends‐Award” at England’s renowned “Golden Gods Awards” on July 17th 2013 at O2 Arena, London. Only three month later, on Septemer13, in Berlin, DORO was honoured again with the German Metal Hammer “Legend Award”.

A true highlight of a career, already going strong and proud for over three decades.

DORO can look back at a really unique journey in the music business. DORO, in numbers this means: Gold and platinum awards for about 10 million sold records, over 2.800 live shows on four continents and in 60 different countries of this world, 16 studio records, four DVD’s. Countless cover stories on all important Music Magazines and millions of overwhelmed fans around the globe.

At the age of 16 DORO started playing in her first bands, but the story of her success began with her band WARLOCK in 1982 and the first album “Burning The Witches”, 1983: the first steps of a world career, that in 1986 got her to perform at the legendary “Monsters of Rock” Festival at British Castle Donnington, as the first ever female musician – and in front of 120.000 frenetic fans.
The same year DORO and WARLOCK took the chance to support JUDAS PRIEST on a world tour. At this point DORO decided to finally quit her job as a graphic designer and to
entirely enter the music business, with all her heart, body and soul. On giant world tours in the USA, South America, China, Japan, Australia and Europe DORO conquered a huge fan base. In Spain and Russia she is worshiped like a goddess. Additionally she has done mega‐tours with icons such as Ronnie James Dio, the SCORPIONS or MOTÖRHEAD.

DORO and WARLOCK recorded a total of four studio records and had their international breakthrough in 1987 with “Triumph & Agony”. Shortly before, DORO had moved from Düsseldorf to New York, where she is still living today. “Triumph & Agony” has sold over three million copies and reached worldwide gold and platinum status. This masterpiece includes two mega‐hits written by DORO herself: ‘All We Are’ and ‘Für Immer’. Up to this very day, those two songs are highlight of every single show.
In 1989 the followup “Force Majeur” continued the mega‐success of “Triumpf & Agony” and entered the German Media Control Charts on #5, reaching gold status within just 14 days.
1990 the self‐titled record DORO followed, which has been produced in L.A. by no one less than KISS‐mastermind Gene Simmons, who is one of her musical idols and added numerous songs to the album.
“True at Heart” was produced in 1991 by famous Barry Beckett (Producer for e.g. THE ROLLING STONES). During the cause of the 90s, more outstanding records like “Angels Never Die” and “Machine to Machine” and the incomparable Love “Me In Black” followed.

In 1994 DORO received a well‐deserved recognition, as she has been awarded a “Female Artist of the Year” at the most important German Music Award “Echo”. She has been nominated for the “Echo” eight times by now.

In the Czech Republic she won the title of “Sexiest Woman Alive” at Spark‐Magazine.

“Calling The Wild” in the year 2000 was another milestone, including ‘Love Me Forever’ and ‘Alone Again’: The first ever duets of DORO. Recorded with the awesome Lemmy Kilmister of MOTÖRHEAD, she shares a longtime friendship with. Another close friend of DORO is 13‐time World Boxing Champion Regina Halmich. A total of four entry hymns was created: ‘All We Are’, ‘Fight’, ‘She’s Like Thunder’ und ‘The Queen’.

In 2004 out of her love for animals and several performances at the beneficial concert „Rock für Tiere“ („Rock for Animals“), where she played with the Metal Classic Night Orchester, the idea was born to produce the sucessful “Classic Diamonds” Album and DVD , which feature DOROs biggest hits in a classical style. In August of 2004 fans at Wacken Open Air were witnesses to DORO performing along with a 60‐ piece orchestra.

In 2006 DORO proves her talent as an actress, as she takes on the female lead of Meha in Luke Gassers movie Anuk – Der Weg eines Kriegers (Anuk – The Way of a Warrior).
At the same time DORO composed her first Movie Soundtrack – “Warrior Soul”. The albums’ titel track was also used as the movies’ theme. 2012/13 DORO returns to the big screen, again in the role of Meha for the sequel, which will celebrate its debut in 2014.
Talking about celebration – on December 13th 2003 DORO had her first big celebration. For her 20‐years anniversary at Philipshalle Düsseldorf, star guests like Biff Byford, Lemmy and Udo Dirkschneider entered the stage to congratulate her.

The same day five years later, on December 13th 2008 at ISS Dome Düsseldorf, guests like the SCORPIONS, Tarja Turunen and many more were on stage together with DORO. The entire show is available on the DVD “DORO – 25 years in Rock”.
At the same time the 2008 single release ‘Celebrate’ of the “Fear No Evil”‐album was becoming a hit in Spain, where ‘Celebrate’ was in the top ten for seven weeks. Spain is inhabited by one of DOROs strongest fan bases. Readers of Spanish Metal magazine “Heavy Rock” voted DORO as best female vocalist 17 times (!) to this date.
In early 2009 “Fear No Evil” entered the German charts at #11.

The summer of 2010 saw the Metal‐Queen sign a new record deal with Nuclear Blast, the leading German label for Rock and Metal (NIGHTWISH, ACCEPT etc.).
Her current album “Raise Your Fist” also entered the Top 20 in October 2012. The new album is surely another highlight of DOROs carreer. With “Raise Your Fist” she does not only gather super stars like Lemmy (Duet on the emotional ballad It Still Hurts) and Gus G (Guitarist of Ozzy Osbourne), but also offers a new hymn as strong as All We Are. Additionally DORO dedicates the song ‘Freiheit – Human Rights’ to the human rights organization “Terre Des Femmes”, who’s ambassador DORO has been since 2009.
The years 2013/2014 entirely dedicated the metal Queens’ big 30‐years “Throne‐Jubilee”. The first act of celebration took place on August 2nd at the 24th W:O:A, where DORO headlined for the 5th time in front of 80.000 fans – followed by an extensive World Tour with special anniversary gigs in New York and Moskau.
To ice the cake, DORO returned to her hometown Düsseldorf on May 2nd and 3rd 2014 for two concert nights, performing a Classic Night  (02.05.2014) and a full power Rock’n’Roll Show (03.05.2014) with illustrious star guests like Biffg Byford (Saxon), Hansi Kürsch (Blind Guardian), Chris Cafferey (Savatage), Lordi and many more, celebrating her big anniversary.