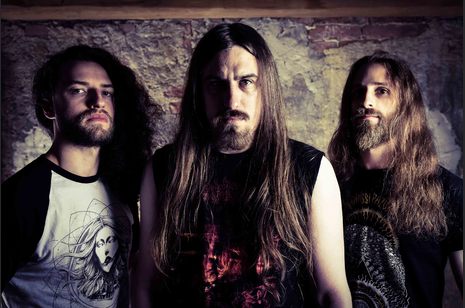 First formed in 2003, Bloodshot Dawn have evolved into a technically ferocious extreme metal outfit. Hailed by Terrorizer as a band that delivers “blistering live shows”, Bloodshot Dawn has become a household name in the UK underground.

Since breaking onto the scene 15 years ago the band has released two EP’s, and three full-length albums, most recently ‘Reanimation’, out in January 2018 via Hostile Media. ‘Reanimation’ was the result of a short hiatus, and reshuffle in the ranks following the ‘Demons’ album campaign, with the band welcoming Canadian shredder Morgan Reid to fill the void left by Ben Ellis who went on to join Scar Symmetry, sticksman James Stewart of Vader fame on drums following the departure of Janne Jaloma and new bass player Giacomo Gastaldi. With a new lineup in place, fresh ideas aplenty, ‘Reanimation’ has been the bands most successful release commercially to date and leads the band on a busy touring schedule throughout 2018 from UK to North America and from mainland Europe to Japan.

Technical, ferocious with an unrelenting work ethic, Bloodshot Dawn have well and truly established themselves as a heavyweight act amongst their peers and the worldwide metal scene.

We are proud to join the stacked line up for BOA18! This will be our fourth time at the festival and it has become some what of a home. We cannot wait to join the party on Thursday night! Get ready for crazy pits!!!