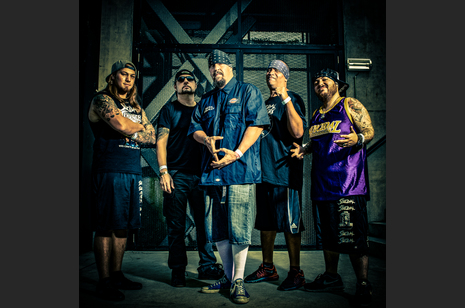 SUICIDAL TENDENCIES, created in 1981 by vocalist Mike Muir, are one of the few Hardcore acts to break out onto the world circuit. Muir and his cohorts often appeared in photographs in the distinctive Los Angeles gang culture dress style of eyes hidden behind bandannas and check shirts held by the neck button. Later this image would develop through the skateboard culture fuelled by songs such as 'Possessed To Skate'.

Amongst the underground hardcore circles the self titled debut was recognized as a classic but as the band grew more conventional rock sensibilities would come to the fore. The band signed to major label Virgin in 1986 as MTV support for the video to 'Institutionalized' raised the band's profile considerably pulling them clear of their indie hardcore roots and breaking the charts on both sides of the Atlantic.

The successful 'Join The Army' album saw the departure of Estes and Smith as the band debuted guitarist Rocky George and drummer R.J. Herrera.
Bassist Louiche Mayorga joined his erstwhile band mates Estes and Smith to form UNCLE SLAM, debuting the new act with the 'Say Uncle' album on Caroline Records during 1988.

The Mark Dodson produced 'How Will I Laugh...' saw the band being enlarged with the addition of ex-NO MERCY rhythm guitarist Mike Clark and bassist Bob Heathcote. However, just as SUICIDAL TENDENCIES were seemingly in ascendancy into the big league their controversial name made them ripe targets for the moral majority. California's police department, fearing Muir's crew was merely a front for a Los Angeles gang, even went so far as to ban the band performing in their hometown. The notorious moral campaigner Tipper Gore led pressure group P.M.R.C. kept up a campaign against the band claiming that a number of teenage suicides were directly attributable to the band.

SUICIDAL TENDENCIES brought in bassist Rob Trujillo for 'Lights, Camera... Revolution'. The album track 'Send Me Your Money', a forthright attack on American television evangelists proved a huge hit with the fans and quickly became a staple of live shows.

Both Muir and Trujillo captured more than their fair share of the limelight at this juncture creating side project act INFECTIOUS GROOVES together with erstwhile JANE'S ADDICTION drummer Stephan Perkins. This side project band that would go on to release two well received albums and test the duo's stamina as INFECTIOUS GROOVES often opened the show for SUICIDAL TENDENCIES. Perhaps wishing to amend previous mistakes the band's next album ' 'Still Cyco After All These Years' was actually a complete re-recording of their debut.

For the 'Art Of Rebellion' album, what was to be SUICIDAL TENDENCIES highest selling record reaching number 52 in the Billboard charts noted producer Peter Collins was utilized. The band once more announced a new recruit in VANDALS drummer Josh Freece who incidentally took over the drums tool in INFECTIOUS GROOVES too.
'Suicidal For Life' had SUICIDAL TENDENCIES recording without a permanent drummer. Freese joined the limbo bound GUNS N' ROSES then PEARL JAM and A PERFECT CIRCLE. WHITE LION and Y&T man Jimmy DeGrasso deputized for the album sessions before he joined up full time with MEGADETH.

SUICIDAL TENDENCIES folded after this release. Rocky George created SAMSARA with CRO MAGS members Harley Flanagan and Parris Mayhew. Trujillo found himself part of the OZZY OSBOURNE band having an interim stint with PALE DEMON. Muir would assemble a studio band, including SEX PISTOLS guitarist STEVE JONES for recording of a 1995 solo CYCO MYKO album 'Lost My Brains (Once Again!)'.

SLAYER covered 'Memories Of Tomorrow' for inclusion on their 'Undisputed Attitude' covers album. However, the track only made it onto the Japanese pressing.
The band, Muir bringing in guitarist Dean Pleasants, bass player Josh Paul and drummer Brooks Wackerman, returned in 1998 touting a six track EP Mike Vail Blum and Paul Northfield produced 'Six The Hard Way'. The resurrected outfit then signed to Germany's Nuclear Blast label for the 'Freedumb' album after which Wackerman opted out, being substituted by Hot Potty. However, in mid 2001 Wackerman returned to the ranks back from his touring stint filling in with A PERFECT CIRCLE. Drummer Josh Freese would be next in line to re-enlist.

In early 2003 ex-member Robert Trujillo became METALLICA's new bass man, this appointment putting a renewed focus on his former band. An extensive round of touring in Europe during the latter half of 2003 would prove arduous for Muir. Upon completion of these dates the frontman entered hospital for two operations on his back. South and Central American tour plans for Februrary of 2004 would be curtailed. 2004 also found Rocky George uniting with UGLY KID JOE and MEDICATION man Whitfield Crane to cut a version of 'Master Of Puppets' for the METALLICA 'Metallic Assault' tribute album through Big Deal Records.