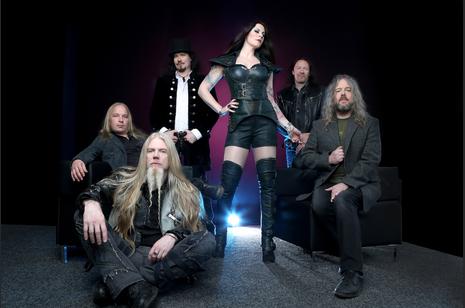 As four guys looking like they’re fresh out of high-school and a girl in leatherpants played at the legendary rock-venue Lepakko in Helsinki, Finland, no-one could’ve known that one day they would be performing gigantic tours and would become the most successful band to ever come from Finland with album sales in figures with more than six digits, well known by their name NIGHTWISH.

From their first album of "Angels Fall First" onwards Nightwish gradually grew, or rather evolved.

The final shackles of labeling scattered with the release of their fourth album, entitled "Century Child". It strayed more away from the more obvious references to melodic “power” metal, and showed promise of a band that was really starting to find its own sound, a band that would yet become something greater. The orchestrations and the choirs met on this album were indeed magnificent and befitting the epic feel of that Nightwish had always yearned for.
Nightwish's 2004 album "Once" sold platinum on its release day in Finland and later in Germany, gold in Austria, Sweden, Norway.
Everybody knew of Nightwish. Even the Finnish prime minister confided as a Nightwish-fan.

The first era of Nightwish ended with an open letter in which the band fired it´s formidable frontperson Tarja Turunen. Was this to be the end of Nightwish? No one knew. People took sides, and a true circus of the media-type began.

On "Dark Passion Play"  the music in conjunction with the lyrics conjure a brooding atmosphere never yet seen, or actually felt, in this magnitude in the saga of Nightwish. The past years and the events leading to this day have naturally affected the outcome of this album, as it is known that Tuomas communicates best through music.
This sixth Nightwish album stands at a dividing line, separating what has been and what will become.

After this the time has come to open a new chapter! It’s time to start this incredible journey into a charismatic composers heart so full of passionate visions, dreams and wishes. Welcome to “Imaginaerum”! This album was released on December, 2nd, 2011. The first single “Storytime” was released on November 11th 2011. The songs for the album were written during 2008-2010, majority of them after the “Dark Passion Play”-world tour ended in September 2009.

The original idea Tuomas had, was to film 13 short stories related to the songs, “and together they would form a complete story”, explains the finnish composer. The film “Imaginaerum by Nightwish”  was released on May 31st 2013.

During the world tour in 2012, the band split up with singer Anett Olzon before they announced Floor Jansen as new vocalist.

In August 2013 they played at the legendary Wacken Open Air - the world’s biggest heavy metal festival. The headliner show in the front of 85,000 fans was filmed with seventeen cameras and directed by Ville Lipiäinen. This live Show was released on the DVD / Blu-Ray “Showtime Storytime" on November 29th (Europe) / December 2nd (UK) / December 10th (US).