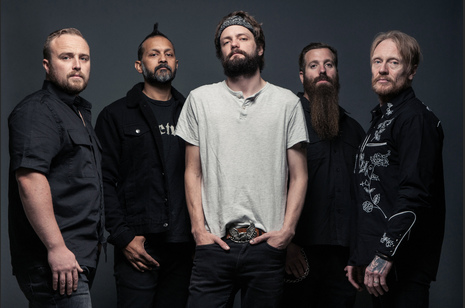 "Bloodstock is where it's at.  We come every year to see the cream of the rock and metal world, and are beyond excited to have the opportunity to get up there are snap some necks ourselves!" – Gavin Mills, Doomsday Outlaw.

Doomsday Outlaw formed as a hard-riffing groove machine in the vein of Black Label Society and early Sabbath in 2012, but really gelled with the addition of powerhouse soulful vocalist Phil Poole, who joined in 2016.  Immediately, the band could let fly with their creativity and quickly crafted a set of blues-rock stompers taking in everything from Zeppelin to the Faces, Black Stone Cherry to Maiden.  They pour their all into crafting juggernaut tunes that bring riff after riff, all topped off with soaring classic vocals.
John, the band's drummer, says of Phil: "He's our ace in the hole. Everything else was in place with the songwriting and performance but Phil has just taken the band to the next level.”

Not wanting to wait around, Doomsday Outlaw quickly jumped in the studio to record our own self-release, Suffer More.

Having put out Suffer More last summer, they were almost immediately contacted by Frontiers Records (Def Leppard, Wayward Sons, Whitesnake, Bigfoot) and offered an album deal, and they wanted some fresh meat!  The band returned to their Derbyshire base and barricaded themsleves in over the long winter months and crafted their new album all set to blow discerning eardrums out the world over.  The new album safely is now securely locked in label vaults ready for release in 2018.

If you need a release for your body and soul – whether you prefer banging your head or singing your heart out, then Doomsday Outlaw look forward to getting the pit going near you.  With a ton of great tours and festivals lined up for 2018 – get ready for the Year of the Outlaw.

Get on board and keep it heavy!