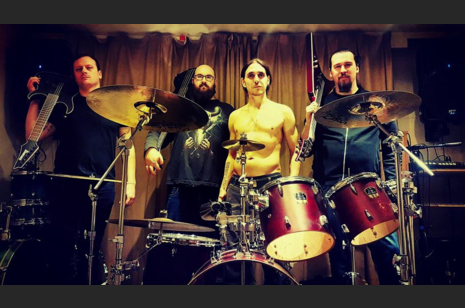 Formed in September 2011, Th1rt3en have been growing and gaining momentum ever since. Originally a 5 piece, the band developed into a 4 piece in 2015 and have never looked back.
Heralding from the Hertfordshire/Essex boarder, the band have very much established themselves in the local area and are now spreading their wings and venturing further afield.
Their EP was released in 2012. During the transition to the current line up, the band recorded a 9 track album, re-recording some of the early material, alongside new songs, showing how much the music and song writing had progressed and the direction in which the band are moving with their own sound. Their songs are very melodic, mixing a blend of heavy verses and clean choruses with guitar riffs, twin guitaring and multiple solos. Ranging from heavy aggressive metal to rocky ballads.
The band made it through to the final of Metal 2 The Masses Hitchin 2017. The competition helped the band to develop their live performances which are energetic and entertaining. They perform with tremednous passion and enjoyment which is fantastic to witness. After falling at the last hurdle in 2017, the band set winning M2TM Hitchin 2018 as their goal. On 1st June 2018, this is exactly what they achieved.
Humbled to be Bloodstock bound, this band are looking to the future and enjoying every second of it.

To play such a prestigious event is an incredible prospect and dream come true. We became consumed by the Metal 2 The Masses competition after our first heat in 2017. Managing to get through to the final of M2TM Hitchin 2017 and not winning, just gave us more hunger and determination to win in 2018. Everything we have done as a band since that final, was all to work towards getting on the New Blood stage and that is exactly what we have achieved.

We have to say a massive thank you to the number of people who have helped us along the way. The people who have voted for us, the judges who have deemed us worthy, our friends and families for the support throughout the years and to our M2TM family who have lived and rocked every moment with us. It is a great honour to represent all of you as your champions of 2018.

Without turning this into a novel, the biggest thank you has to go the people involved in M2TM and more specifically M2TM Hitchin. The concept of giving bands exposure and an incredible opportunity to reach a bigger stage and wider audience to this degree, just doesn't happen anywhere else. The competition really gives bands a leg up and Simon has done great, no incredible job, in starting the idea and setting it off like a snowball from the top of mount Everest. Nicholas Plews has pretty much single handed, instigated an incredible buzz in and around Hitchin for Metal and local bands. He is a great man and a great host! And finally to Club 85 and Bob Mardon. At a time where music venues are in decline, club 85 is a shining beacon of what live music was and still can be.

From the bottom of our hearts