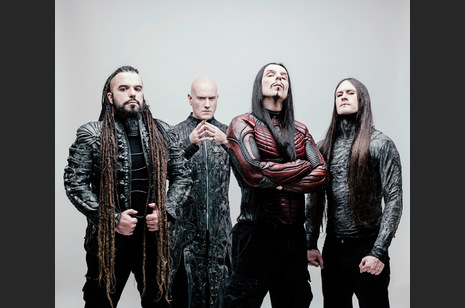 SEPTIC FLESH considered to be one of the pioneers of the Hellenic death metal sound, were formed in the 90’s.

After a demo entitled “Forgotten Path” and a Mini Lp entitled "Temple of the Lost Race" they managed to attract the attention of the French label Holly records, gaining access to the wider underground scene.

Their first full length album entitled "Mystic Places of Dawn" was recorded in April 1994 with M.W. Daoloth (from the cult black metal band Necromantia) as Co-producer.
One year later, in June 1995, they released "Esoptron", a dark opus with deep ancient Hellenic musical influences and themes dealing with philosophy and the occult.

In March 1998, the band released "Fallen Temple". It was a “crossroad” that represented the past of the band (the compositions of the rare “Temple of the Lost Race” re-recorded) but also presented a glimpse to the future, with some new material. In September of the same year, was also released a limited EP entitled "D.N.A Choronzone", which included the video clip for the song "The Eldest Cosmonaut" and 4 special tracks.

In June 1999, the band invaded Sweden to record with acclaimed producer Fredrik Nordstrom "Revolution DNA". The album was launched in October 1999 and presented highly addictive material, with a more straight forward metal attitude.

The first era of the band was concluded with the release of “Sumerian Daemons” in 2002. This album was the turning point to a more brutal and bombastic sound, while the dominating choir parts in Ancient Sumerian language, created a truly demonic atmosphere.

The next chapter of SEPTICFLESH (with the two words merged together from now on) begun in 2008, as the band signed with French labor Season of Mist and released "Communion". The album was recorded once again at Fredman studios in Sweden, with Fredrik Nordstrom as producer. Music-wise, it was a bold step forwards, as the band decided to utilize for the first time a full orchestra. The Filmharmonic Orchestra of Prague was chosen for the task, while Chris Antoniou, having obtained a Bachelor's and Master's degree in concert music in Londod, was responsible for the classical arrangements. The result was a unique merge of Death Metal heaviness, with Symphonic rage.

The next album "The Great Mass" was released in 2011. This time, the band collaborated with Peter Tägtgren for the production. The songs were heavy and at the same time highly technical and experimental, as the orchestral parts were further evolved. In addition the band collaborated with two exceptional female vocalists, Androniki Skoula (Mezzo Soprano) and Iliana Tsakiraki (Soprano). The overall result was a Grand dark metal "soundtrack".

The latest effort of the band is "Titan" released in 2014. The album was produced from Logan Mader. The title of the album, pretty much sums up its sound and general atmosphere. Primordial, menacing, majestic. Besides the use of Filmharmonic Orchestra of Prague for the third time, the band worked for the first time with the Children Choir of Prague, adding an eerie tone to the songs. After long years of experimentation, Septicflesh have reached to a point that their metal and symphonic elements are fused together in a solid unity. The song "Prometheus" (that is very indicative of this balance between power and atmosphere), was chosen to visually represent the album, in the form of a video clip.

"On winds of smoke they are singing, their calling is the calling of the free, Fly with Us" - Burning Phoenix