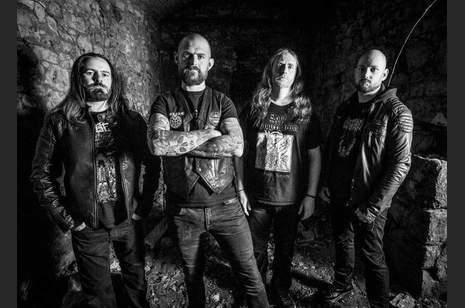 ZEALOT CULT were formed in Limerick, Ireland in 2008 and released their self titled demo in 2010. After a few years in exile, the band released their 2016 EP "Karmenian Crypt" which received widespread praise from the international metal community and was released on vinyl exclusively by BLOOD HARVEST Records.The band went on to share bills with legendary bands such Napalm Death, Possessed, Destroyer 666, Pestilence, Decapitated etc..

In November of 2018, ZEALOT CULT released their debut album "Spiritual Sickness" again through BLOOD HARVEST and has received overwhelmingly positive reviews from the international metal community and various media outlets. Comparisons have made to the classic Floridian Death Metal sounds of the late '80's/early '90's citing legendary artists such as Morbid Angel, Obituary, Death, Pestilence etc.. The band are busy on the live circuit so far in 2019 having already made their UK debut with shows in London and Bristol, support slots with Pestilence and upcoming festival appearances and some shows on the east coast of USA in the works. "Spiritual Sickness" is available through BLOOD HARVEST records on all formats and is available on Spotify and Apple Music. Join the Cult!!

ZEALOT CULT are delighted to be playing at the 2019 instalment of B.O.A. , a festival that we have watched grow from humble beginnings as an indoor fest to the international outdoor event that it has grown to become. We are looking forward very much to bringing our style of Death Metal to the Bloodstock audience and it is an honour to share the bill with bands such as Scorpions, Anthrax, Rotting Christ, Grand Magus etc... See you in August Bloodstock!!! DEATH METAL!!!!