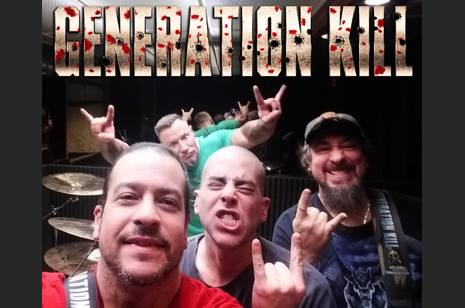 Generation Kill is a Metal band based in N.Y. which features Rob Dukes of EXODUS
This is a diverse band using all it's influences to explore beyond just thrash. Generation Kill incorporates many different styles of music,  All five members have diverse musical backgrounds, which define and allow GENERATION KILL to be a band with no limitations.

Their highly acclaimed on Season of Mist released debut album "Red, White and Blood" incorporated already everything any aficionado of the genre might have wished to hear for the last decade: crunchy riffing, capturing melodies, killer solos and exactly the right dose of unashamed aggression that propelled bands like METALLICA, ANTHRAX, MEGADETH, TESTAMENT and many others to the forefront of extreme Metal music in the 80's. Yet GENERATION KILL do neither serve a dusty trip into nostalgia, nor is this a bunch of kids desperately trying to recreate what they never exprienced.

After their first release “Red, White and Blood” on Season Of Mist GENERATION KILL have released their second album (We're all gonna die) with Nuclear Blast records. Produced by Zeuss, who is well known for his work with Agnostic Front, Chimaira, Hatebreed, Shadows Fall and Rob Zombie amongst others. They approached the new record as a challenge by trying not to do the same thing as on the first record but at the same time still keeping their identity of who they are – a group of guys that grew up on metal, punk and Pink Floyd – outside the norm.