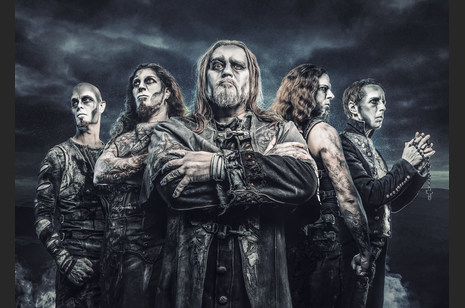 In the year 2018, you can truly expect great things from POWERWOLF. The absolute high priests of metal have repeatedly managed to outdo themselves in their career and delight their fans all over the globe!

With Blessed & Possessed (2015), POWERWOLF achieved GOLD status in the CZ for the first time and earned a place in the official German Top 100 album charts for nine weeks - reaching the TOP #3 on the album charts! The predecessor Preachers Of The Night (2013), as well as the DVD The Metal Mass (2016), also stormed the top of the German charts. The accompanying Wolfsnächte tour, in which POWERWOLF headlined large venues, became a single major triumph - as well as the numerous summer festival shows in which the crowds were thrilled and completely captivated by the ‘wolf.

On July 20, 2018, The Sacrament Of Sin will be released via Napalm Records: a catchy and intense album - furious, epic, heavy and wolfish! POWERWOLF stay true to themselves and their unique style on their seventh disc. The Sacrament Of Sin holds more than a dozen Metal psalms, presenting an album that goes straight to your ears with its catchy hooklines and catchy choruses. At the same time, The Sacrament Of Sin bears witness to its compositional sophistication and untamed wolfish savagery!
Speaking of "wolfish": The musical style is not the only aspect of POWERWOLF that makes them truly unique. From the beginning, the band have presented strong content and visual concepts that are the perfect complement to their music. It starts with the lyrics, spiced with puns, and goes on to the striking artwork and lavish, opulent stage show, and of course includes the suitably gloomy presentation of all band members.

POWERWOLF convince not only on record, but also on stage, where they turn out to be true masters of entertainment, celebrating a huge metal party with their fans every time they perform. POWERWOLF not only rely on their great songs, they hold a true metal show and play skillfully with religious / spiritualistic elements. The light show, as well as the sacral stage sets, provide the appropriate festive mood, and without the compulsory blessing of front priest Attila, the band will not let any of their metal disciples home. POWERWOLF simply combine all aspects of a rousing, goosebump-evoking overall experience that has earned them the reputation of being one of the best live bands ever. The wolf gets everyone! This has meanwhile been proven by the band at major German and European festivals such as Wacken, Hellfest, Graspop, Summer Breeze, Masters Of Rock - just to name a few - and on international headliner tours.
Already with their debut, Return In Bloodred (2005), as well as its successor Lupus Dei (2007), POWERWOLF were well on their way to success. Bible Of The Beast in 2009 demonstrated that the band had finally manifested their very own style and sound: The inclusion of organ created as unmistakable band sound combined with opulent choirs and Attila Dorn's vocals. They revised their wolfish sense of great metal anthems even more on the grandiose Blood Of The Saints.

This success story is now updated with The Sacrament Of Sin and will catapult  them into a new dimension.

Numerous magazines will dedicate their title story to the wolves, and POWERWOLF are also confirmed for top-class festivals such as Download France, Summer Breeze, Graspop, Masters Of Rock and many more. In the autumn, the next extensive Wolfsnächte tour is scheduled, at which POWERWOLF will open the most elaborate and largest stage show to date. Hallelujah and Amen & Attack!