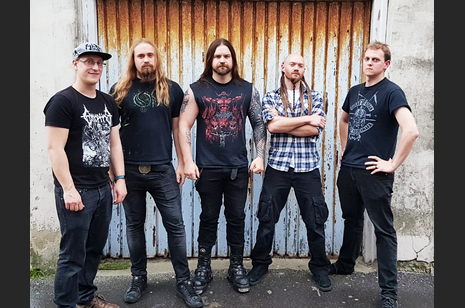 Anakim are a progressive death metal band from Dorset, UK. Founded in the summer of 2011, they released their debut album, ‘Monuments to Departed Worlds’ to rave reviews in April 2017 and are currently in the process of recording and finishing their as yet unnamed second album. Heavy, rhythmical riffs, melodic layers and daring song structures have become the signature of Anakim’s sound. The lyrical themes are epic and diverse; ancient Mesopotamian mythologies merge with modern science fiction to sculpt a truly grandiose atmosphere.
Following the release of their debut album, Anakim went in search of a new vocalist and, in December 2018, proudly announced guttural machine Matt Small of The Drowning as their full time frontman. This development couldn’t have come at a better time, allowing Matt to take an active part in the vocal writing for the second album, making it a fully collaborative effort. Matt and the band – lead guitarist, Joe Ryan; guitarist, Carl Hunting; BTK drummer, Ewan Ross; and bassist, Ant Ridout – are raring to release this new material, so keep your eyes open for updates. For now, you might be lucky enough to see them perform a few songs from the new album at their upcoming gigs, including Bloodstock Open Air 2019.

We have been blown away by the support throughout the M2TM heats. Every attendee that watched our shows we have to thank for the immense opportunity that is playing Bloodstock! We could not have done it without you guys. We also want to thank Bear for asking us to compete, and hosting some awesome shows in an awesome venue. The UK extreme metal scene is producing some insanely good music lately, so it feels great to be recognised for what we are doing. We look forward to bringing our latest material to BOA, and catching up with our bros from all over the UK with a beer or twelve!