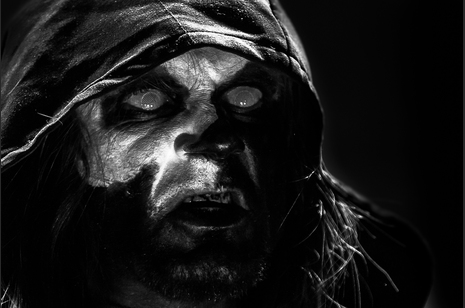 TAAKE's seventh full-length album "Kong Vinter"  further cements the reputation of its enigmatic founder and frontman, Hoest, as one of those rare artists who manage to keep alive the old Norwegian spirit of Black Metal, in what has nowadays become a multi faceted, and fractured,  genre.  And, not only does he succeed in keeping the original genre alive, he also manages to breathe fresh life into it, with the introduction of new, and sometimes surprising, elements into the band's music, whilst at the same time ensuring that it never loses that icy, dangerous, edge.

With a live lineup of skilled, and highly experienced, musicians, TAAKE has also become a force to be reckoned with on the live circuit.   Hoest's charismatic persona and powerful presence dominate the stage, and his high octane performances,  combined with an  extensive back catalogue from which to draw the band's set, means that TAAKE's shows are not just unique, but also varied. Regardless of whether they take place in an intimate club setting, or large festival arenas, TAAKE's shows, like TAAKE's albums, have, over the years garnered high praise from fans and critics alike.

After over two decades and seven highly acclaimed albums, some of which are regarded as quintessential Black Metal classics, and one of which received a nomination for the Norwegian equivalent of the Grammys (Spellemanns-prisen), TAAKE's sound still remains fresh and relevant today.  It is the quality of Hoest's studio output, combined with the band's dynamic live shows, that has ensured that the legions of old fans remain faithful, and that new fans come flocking to the band to get a taste of TAAKE's Helnorsk Svartmetall.

Indeed, True Norwegian Black Metal is not dead, nor will it be, while its traditions, and  its future, are in a safe pair of hands.