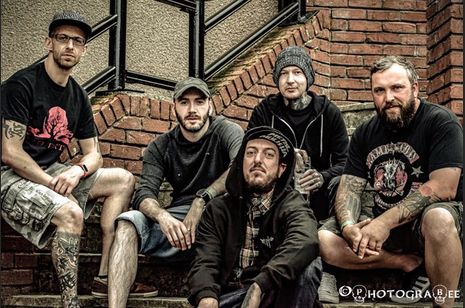 After sitting around for a few years following the demise of their previous bands, Dan (Guitars), Harris (Guitars) and Ben (Drums) decided to do something about it. With a few ideas firmly in place, the hunt was on for the remaining members of the lineup to be added. Scars of Remembrance (V1) was born.

After a difficult first year of existence, the band parted ways with their vocalist, and soon after, their bassist. Queue another difficult 12 months. At the beginning of 2015, Dean was chosen to join the ranks on vocals, and by the end of the year Karl was added to bring some rumbling bass to the table. Scars V2 was ready to go.

Some time was spent getting to grips with the songs, writing some new material, changing the older tunes to add the new guys style and generally getting back into the swing of it with a full line-up.

After 2 years and a fair few gigs, Scars suffered yet another change. Exit Dean, Enter Mike. 2018 saw Scars V3 back out with a new vocalist and a new outlook on their music. Tighter riffs, bigger beats, heavier lead vocals and more melody.

It's one of those things that we've seen countless bands achieve over the years and we've never thought we'd get close. There's no other way of saying it other than we're absolutely chuffed to bits that we've been given the opportunity to play at Bloodstock!

We're still in a state of shock that we got to the 'Metal To The Masses' final, let alone win. Scars was only a hobby for us, as we're no spring chickens, but to have so many people showing an interest and enjoying what we do, especially over the course of the competition has been an eye opener.

We can't wait to get on the New Blood stage and show everyone what Scars of Remembrance is all about.