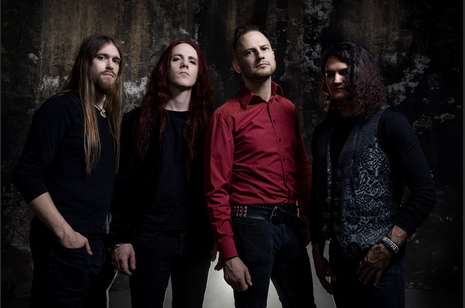 London. Blackened thrash. No bullshit. No compromise.
Nightmares fire the imagination. Only the total refusal to adulterate what makes you who and what you are will yield anything of genuine value.
Damim do not compromise in performance, composition or aesthetics. Damim do not care for ephemeral, superficial expressions of what happens to be used as a shortcut for social acceptance at any particular time. Damim do not want to be part of your circle of love. Damim do not care for namedropping or superlatively pathetic glamour by association. Damim do not care for the idiotic, theatrical pretense of nihilism or hate through slogans contrived in the language of the simpleton.

In the making of Damim’s latest full-length “A Fine Game Of Nil” there were no shortcuts – the necessary time was taken composing, honing and recording some of the heaviest, most jagged material to date and we employed the best in the business to bring it all together. The man who mixed greats such as Nile's "Annihilation Of The Wicked", Nevermore's "The Politics Of Ecstasy" & Judas Priest's "Unleashed In The East", Neil Kernon took on this project and, aside from providing boundless insight and more heavy metal anecdotes than you can shake a stick at, he did a phenomenal job.

The mixing, mastering, & artwork are now complete and the band's third album and first record as Damim will be released on Apocalyptic Witchcraft Recordings on CD, limited edition vinyl & digital this 28 June 2019.

Damim are proud to be able to announce that we will be performing at Bloodstock 2019, headlining the New Blood stage Sunday 11 August.
For any UK band, performing Bloodstock is the keystone festival and a first chance to work with the disciplined and organised team who make the festival happen is a true privilege.

Above all we are ecstatic to have the opportunity to perform for some of the UK’s most dedicated festival fans.
See you at the front.