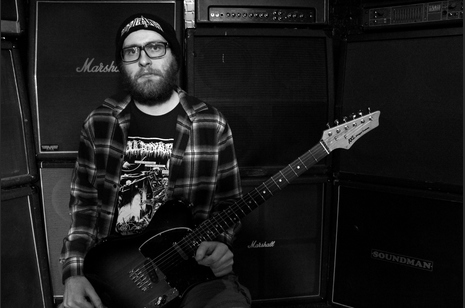 One man, armed to the teeth with rapid fire riffs and backed by a drum machine set to kill... A Foul Body Autopsy live show flies in the face of all your preconceptions of what a metal performance should be, yet delivers everything you could ask for at the same time. Tom Reynolds may stand alone, centre stage, with no support behind and beside him, but he delivers his venomous songs with such rabid intensity that he commands the attention of every eye in the house.  Described by noted review site Angry Metal Guy as a “fucking riff machine”, Reynolds’ delivery is relentless. A host of EPs and singles as well as two full length albums – including the latest shocking barrage, The Unquiet Dead – have been released under the Foul Body Autopsy name, meaning that there is a huge stockpile of high impact material in the Foul Body Autopsy arsenal. Everything that the studio releases deliver is matched, if not exceeded, by the high intensity live shows. Foul Body Autopsy has racked up a huge number of live shows, decimating audiences at festivals, all day events and club shows.

I am absolutely over the moon about being allowed to play Bloodstock Open Air for the third time. I first played in 2011 and since then I have been in love the festival. Every time I go to B-O-A I always end up thinking I’d love to play again someday. Returning to the Jägermeister stage is going to be amazing, I love playing that stage hopefully it will be as crazy as it was the last time I played in 2015