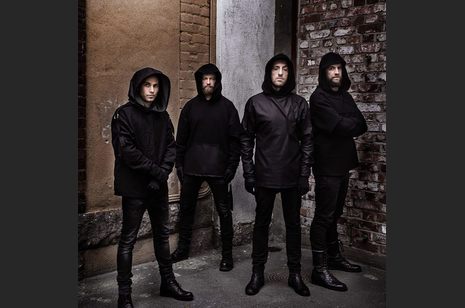 “Life is like a wheel. Sooner or later, it always come around to where you started again.” – Stephen King
Looking back through history, the best music has always been born of brave acts of courage. It’s something Wheel frontman James Lascelles knows more than most, having relocated over a thousand miles from England to Finland to pursue music as a career. After meetingsomelikeminded musicians in Helsinki– namely bassist Mikko Määttä, drummer Santeri Saksala and guitarist Saku Mattila, eventually replaced by Roni Seppänen – Wheel was born.

Now, following on from the overwhelming success of their The Path and The Divide EPs, the quartet will be releasing their debut album Moving Backwards on February 22nd, 2019. It’s an expansive and mind-melting collage of progressive rock, grunge and film score that twists and turns in ways no band have ever done before... “We’re not really sure where we fit,” shrugs singer/guitarist James. “Or whether it’s metal or it’s rock, because it’s both... or neither ha ha! Well it’s both, one or the other depending which point in the track you’re up to. Karnivool are one of my favourite bands of all-time, as well as Radiohead and even Alice In Chains for some of the riffs. Fans of those kinds of groups will definitely understand what we’re trying to do. I guess with us, instead of the never- ending wait for that next Tool album, we thought we’d just make what we’d want to hear!”

As it turned out, they weren’t the only ones seeking such creative endeavours and word quickly spreading of their knack for time-defying grooves, heavyweight orchestration and dark surrealism. Dissecting the media’s portrayal of the nightmarish inhumanities of the Syrian refugee crisis on early single Please, they established themselves as a group very much unafraid to speak out. This time round, they’re holding their magnifying glass up to censorship and institutionalised mind control – an epidemic that’s sweeping that world, affecting just about every single human on the face of the Earth...

“The jumping off point was a podcast I was watching where Sam Harris was talking to Joe Rogan about this imagined future,” explains James, in between dates of their November tour with Finnish progressive folk titans Amorphis. “They covered censorship in academia, which is becoming increasingly common in the States. If it continues, filtering out into films, comedy and music – we’ll end up in a place where nobody can say anything anymore. The lyrics I wrote for Tyrant – with lines like ‘silence will become the banner’ – are heralding what’s to come, though I’m hoping we can nip it in the bud before it gets there. On this album, rather than looking at environmental or economic dystopia, we’re anticipating more of a more social one.”

With what could very well be the rock debut of its year under their belts, dates with Swedish art-rockers Soen [featuring ex-Opeth drummer Martin Lopez] and festival appearance keeping them busy throughout summer, 2019 will be a landmark time for the quartet.

Get ready for the year of Wheel.