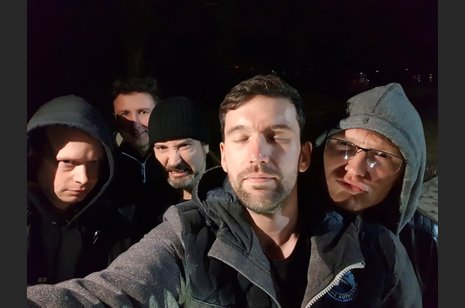 Fear Bound are a 5 piece Melodic Dread Metal outfit from Cambridgeshire, with a range of influences noting Devin Townsend and Children of Bodom in particular.

The music of Fear Bound consists of intricate dueling guitar wizardry, an unrelenting assault of bass and drums, soaring keyboards, and vocals oozing with dread. Also sometimes accordions and other nonsense. Fear Bound recorded and released their 3rd, and most dread leaden album “Seize The Day” in June 2018 and are currently working on new material and, hopefully, a new gimmick.

Originally formed in 2013 by Will Smythe (Guitar) and Jack Harris (Drums), the full line up was only finally realised in 2019 with the addition of Craig Burkitt (Keyboards). Over the years there has been some shuffing of the line up which now consists of:

"We are so grateful for the opportunity we have been given here, and will be reeling from the shock of getting to Bloodstock for some time to come. The Hitchin M2TM journey itself has been an absolute joy and we have loved every single second of it. We have been blown away by the amount of support we have received, and it all absolutely reinforces the sense of family and community that is so strong in metal.

In truth we're a bit befuddled as to how we got here, stumbling from one daft idea to the other, with inane accordions, a stupid 8-bit intro and one single joke about dread. Nonetheless, we are honoured to have made it and we will always be thankful for Bloodstock and M2TM.”