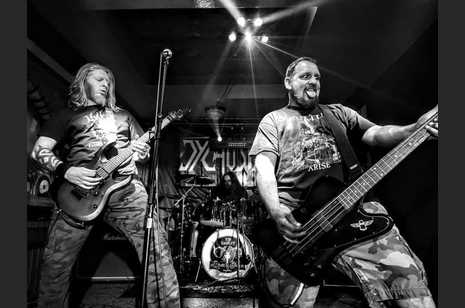 The name of a rare autoimmune blistering skin disease, PEMPHIGOID was chosen as the band’s moniker. And this medical theme features prominently in the bands lyrics. Songs telling stories of disease, mental illness, surgery and various clinical institutionalised horrors...

It all began in mid 2016, when Rich (Drums) and Ash (Guitar and Vocals) first met in another local Death Metal band. They soon agreed that this project had a limited future, so they set out on their own. Their mission was a simple one; both desired a return to the Old School Death Metal sound of the late 80’s and early 90’s. PEMPHIGOID aimed for an emphasis on song writing over speed, and a prominence of brutality rather than technicality. Soon Bill joined the band on Bass Guitar, he shared this Old School ethos, and so the triumvirate was complete.

After all the years of attending Bloodstock, Pemphigoid are delighted to bring their own brand of Flesh Rotting Death Metal to the proceedings. To be a part of an event comprising of so many great bands, at festival we consider to be the UK’s premier metal festival, has blown our minds!