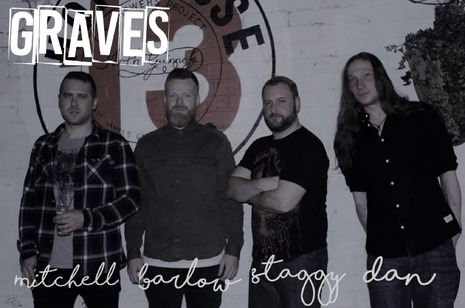 GRAVES in its current form was established back in July 2017 in Leicester, when Brad Mitchell & Ash Barlow recruited Aaron Stagg (Staggy) on drums.
Both Mitchell & Barlow had tracks down prior to this point but a vocalist & lyrics had yet to be established.  Fast forward to October 2017 and Dan Shenton was brought in on vocals to complete the line-up.

Dan wrote all lyrics for all tracks and by December 2017 with already 13 tracks completed, we had our live Debut.
Our style has been likened to a mash of influences from Hard Rock, Stoner Rock, Desert Rock to early Grunge. However, we don’t specifically have a label for our sound or what we do.

We entered Metal to the Masses (M2TM) 2018 and on what was only our third gig (ever) we played our first heat.
We had a great run of shows with M2TM 2018 and to our surprise we secured a place in the Grand Final which was held at the iconic DE Montfort Hall in Leicester as part of the Uprising Festival.

Although putting on the best performance to date we were not victors on the night.  We received glowing reviews from several media outlets who witnessed our performance and we were tipped as being “A band to watch for the future”.

In such a short space of time, our live performances, catapulted us with full force firmly into the music scene within Leicester, The East Midlands & further.

In May 2018 we released our very first single "Unknown"
In Sep 2018 we released our second single “Lost Control”
In May 2019 we released our third single “And so it begins
”
We really have had a meteoric rise over the last two years, and we feel we have already made the impact at this stage that we were always hoping to create.
We have now finished recording our first full length album, with the album expected to drop mid to late 2019.

So far 2019 has been another amazing year for us!! We did a couple of low-key shows at the start of the year to prepare us for another shot at metal to the masses in Leicester and by winning a slot on the Jaeger stage we have already surpassed our expectations.was established back in July

We are absolutely thrilled and honoured to be playing Bloodstock festival 2019. For us this is a culmination of a lot of hard work and effort over the past two years of our band’s short existence.

We have been privileged to be part of the Metal to the Masses Scene for the past two years and in our second attempt we have made it.
For us Bloodstock was always the goal, we couldn’t think of a better place or better festival for that matter to showcase our band and our music.

We won’t take this opportunity lightly.  We know how much effort goes into getting bands like us this far, so we in turn are now going to put the effort in to bring our unique style to the crowds of Bloodstock, by putting on a show to remember, that all can enjoy and that we can be proud of.
Bloodstock and the Metal to the Masses community is so important.  Without such a platform and without the dedication they give to bringing new bands through, bands would struggle to get exposure and get heard.

We want to thank everyone involved in This incredible festival and the Metal to the Masses fraternity.
We will not let you down.